The Society of Professional Journalists (SPJ) has issued a statement strongly criticizing the National Broadcasting Corporation (NBC) for its continued use of retired Gen. 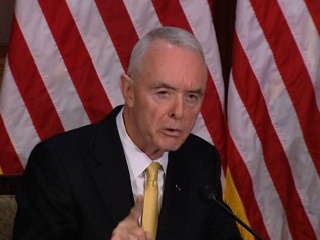 What will it take, for the Defense Department officials involved to be held responsible for an illegal government propaganda campaign? Why don't news professionals realize that they need to vet their commentators and disclose any potential conflicts of interest to their audiences? When will the cable and network television stations that featured the Pentagon's pundits tell viewers that their war commentary was anything but independent?

An in-depth article on one of 75 retired military officers covertly cultivated by the Pentagon to be its "message force multipliers" recently raised these questions yet again. Retired general, NBC News analyst and industry consultant Barry McCaffrey is a prime example of "a deeply opaque world," where "privileged access to senior government officials" and "war commentary can fit hand in glove with undisclosed commercial interests," writes New York Times reporter David Barstow.

The White House says that the Iraqi Parliament's approval of the Status of Forces Agreement (SOFA) is cause for celebration and a sign that we have won the war. White House Press Secretary Dana Perino rejected the idea that the Agreement's stipulation of troop withdrawal in three years is in fact exactly the type of timetable that President Bush has consistently opposed.

Viral emails have emerged as a form of stealth propaganda recently, most noticeably in the recent U.S. presidential campaign, when Barack Obama was dogged with false claims that he was a Muslim, that he was refused to salute the American flag, that he was not a U.S. citizen and so forth. The Washington Post reported earlier this year that Danielle Allen, a professor at the Institute for Advanced Study in Princeton, New Jersey, attempted to trace the chain of one of those emails and found what the Washington Post called "valuable insight into the way political information circulates, mutates and sometimes devastates in the digital age." She noted that the anonymous nature of viral emails, combined with the word-of-mouth way that they spread, makes them hard to counter. "This kind of misinformation campaign short-circuits judgment," she said. "It also aggressively disregards the fundamental principle of free societies that one be able to debate one's accusers."

"Public relations firms across the country predict massive layoffs in the coming months due to recent legislation outlawing the firms' most lucrative practices," according to an article in a spoof edition of the New York Times, dated July 4, 2009. The real Times reports, "In an elaborate hoax, pranksters distributed thousands of copies ...

The U.S. Government Accountability Office (GAO), the nonpartisan investigative arm of Congress, has released its list of "urgent," "critical" and "time sensitive" policy concerns for President-elect Barack Obama and the new Congress. Several are military-related, such as the "U.S.

Evergreen Defense & Security Services (EDSS), an Oregon-based aviation company and military contractor with a history of working for the CIA, recently offered their services on Election Day. EDSS "has recognized the potential conflict that could occur on November 4," firm president Tom Wiggins wrote in an email to Oregon county clerks. "EDSS proposes to post sentries at each voting center ...