David Barstow of the New York Times has written the first installment in what is already a stunning exposé of the Bush Administration's most powerful propaganda weapon used to sell and manage the war on Iraq: the embedding of military propagandists directly into the TV networks as on-air commentators. We and others have long criticized the widespread TV network practice of hiring former military officials to serve as analysts, but even in our most cynical moments we did not anticipate how bad it was. Barstow has painstakingly documented how these analysts, most of them military industry consultants and lobbyists, were directly chosen, managed, coordinated and given their talking points by the Pentagon's ministers of propaganda. 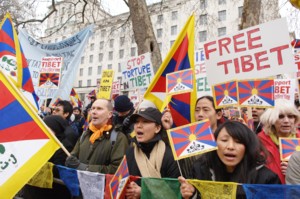 The Free Tibet Campaign in the UK has warned that "any PR agency that is trying to assist China in its twisted distortion of the truth would be potentially exposing itself to protests outside its offices." Despite this, PR Week reports that Ogilvy,

The pro-war lobby is heading to Washington and the halls of Congress Tuesday, April 8, when General David Petraeus testifies on the continuing war in Iraq.

Two leading anti-war journalists are challenging MoveOn, one "of the most prominent anti-war voices," to turn its activism against Democratic Party presidential candidates Barack Obama and Hillary Clinton.