For Richard A. Clarke, the former Bush administration security advisor whose tell-all book was denounced as a betrayal four years ago, the current White House attacks on former press secretary Scott McClellan are reminiscent of what he went through. "It's like an echo chamber," he told Comedy Central's The Daily Show. 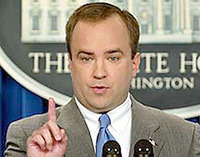 Greg Mitchell of Editor and Publisher notes that New York Times military reporter Michael Gordon, "who contributed several false stories about Iraqi WMD in the run-up to the U.S. attack in Iraq," has been writing about Iran's alleged involvement in attacks against U.S. service members in Iraq. Gordon's latest article, "Hezbollah Trains Iraqis in Iran, Officials Say," is "based solely on unnamed sources," notes Mitchell.

An article from McClatchy's Baghdad bureau also contradicts Gordon's New York Times piece. McClatchy reports that the Iraqi government "seemed to distance itself from U.S. accusations towards Iran." Iraqi government spokesperson Ali al-Dabbagh said the government had formed a committee to find "tangible information" about Iranian activities in Iraq, instead of relying on "information based on speculation." Al-Dabbagh also told Agence France-Press that there is no "hard evidence" of Iranian support of insurgents in Iraq.

Retired U.S. Air Force Colonel Sam Gardiner has seen this sort of poorly-sourced reporting before in the New York Times as part of the propaganda campaign that led America directly into the disastrous quagmire in Iraq.