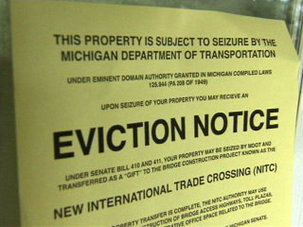 The Koch-backed group Americans for Prosperity (AFP) has been posting fake eviction notices on the doors of residents of a Detroit, Michigan neighborhood, frightening homeowners in a city with one of the country's highest foreclosure rates. AFP 's goal is to get people to oppose construction of a new bridge that would connect Detroit with Canada. Canada agreed to fund a loan to construct the bridge, to be called the Detroit River International Crossing. AFP argues that the bridge is "unwarranted" and a "boondoggle." Large capital letters near the top of AFP's flyer say "EVICTION NOTICE." The medium-sized print at the top says "This property is subject to seizure by the Michigan Department of Transportation." The fine print says the property in question could be seized if a bill approving the bridge is passed. The editorial editor of the Detroit Free Press called AFP's fake eviction notices "emotional terrorism." Scott Hagerstrom, state director of the Michigan chapter of AFP, refused to apologize for the flyer or for rattling Detroit residents. Hagerstrom said, "It was meant to startle people ... We wanted people to read it."