Charity Sells Sexualized "Cause" Bracelets to Teens, Rakes in Millions 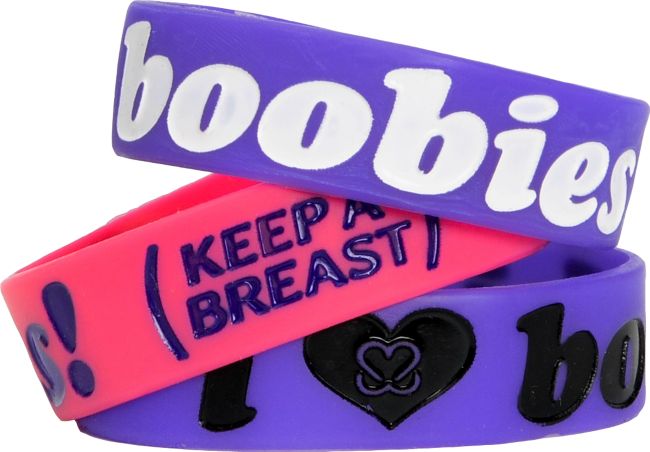 The "Keep A Breast Foundation" in Carlsbad, California is causing a stir by selling rubber cause bracelets to teenagers that say "I (heart) Boobies" for $4.00 apiece. The bracelets' sexual innuendo has made it a runaway hit among teenage boys, some of whom have been suspended from school for wearing them. Schools from Florida to California are banning the bracelets, arguing that their message makes some people uncomfortable, is demeaning and trivializes the seriousness of the disease. One Oregon high school said the "awareness" message was lost on the ninth-grade boys who were wearing them. But even more eyebrow-raising than the bracelets' sexualized message is the Keep A Breast Foundation's financial picture. According to MSNBC, tax records show the Foundation spent a minuscule 1.4 percent of its 2008 revenue on breast cancer research awards and grants. In 2009, it spent a similarly small fraction on such programs, despite an income of $10 million or more likely gained from the runaway sales of its "Boobies" bracelets. Breast Cancer Action, which reports on incidents of pinkwashing, suggests consumers ask critical questions about where their money goes prior to buying merchandise that purveyors claim helps advance a cause.