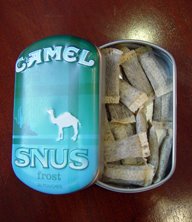 Amid an increasingly hostile climate towards secondhand smoke and tobacco advertising, tobacco companies are battling to maintain both their nicotine markets and the ability to use their logos. R.J. Reynolds stopped advertising cigarettes in magazines in 2008, but is once again printing its Camel logo in major magazines like Rolling Stone, Sports Illustrated and Maxim, in ads for a new form of non-combusted tobacco called "snus" (rhymes with "moose"). Snus is a form of chewing tobacco promoted as "spitless" because it's low salt content keeps users from having to expectorate tobacco juice publicly. Snus has been popular in Sweden. Some experts consider it safer than cigarettes because it is not burned, but this is the first time a major cigarette manufacturer has tried to market snus in the U.S. Camel snus ads promote the product as a way to get around smoking bans in airports, sporting venues and at concerts. Public health advocates point out that RJR is marketing snus as a complement to cigarettes, not as a replacement product, and that use of both products can lead to a dual nicotine addiction which is even harder to quit than addiction to one form of nicotine. RJR is also test-marketing other forms of non-combusted nicotine: dissolvable pellets similar to Tic Tacs called "Camel Orbs" that contain finely-ground tobacco, and nicotine-containing oral-use strips that resemble Listerine breath-freshening strips and that melt on the tongue. Danny McGoldrick of the Campaign for Tobacco-Free Kids says the inconspicuousness of such products makes them undetectable in a classroom setting, which "could entice kids into the habit of tobacco use."

Wouldn't this cause the same problems as "smokeless" (dip, etc) tobacco such as mouth cancer? Seems like it would.

I think that compared to dip snus sounds like a great idea. I am sick of people spitting all over the place at least it would stop that.

This 'snus' just sound disgusting. I stopped smoking 12 weeks ago after smoking for 20years, and the last thing I could imagine is taking this stuff...quit smoking and look after your body, you will feel amazing.

Well well well, it looks like you can't compete with tobacco manufacturers, they always find a way to feed people's addiction to nicotine, we should give them credit for that. The nicotine addicts would probably prefer snus instead of proper care in addiction treatment just because it's more comfortable to feed their addiction instead of quitting it.

Amazing how much ignorance and bigotry is thrown at tobacco users, and nothing but silence from those that claim to defend the defenseless. Snus is in fact proven by numerous studies dating back 5 decades to be over 98% less harmful then smoking, with no connection to any oral cancer. It is in fact a way for millions of smokers who have been unable or unwilling to quite smoking to vastly reduce the harm associated with tobacco use. It's not tobacco that kills, it's the smoke.

In the US we have been following an abstinence only... quit or die approach to tobacco. Very 21st century Puritan, for those that are into that kind of thing, but the results have been that the quit rate for smokers has been stagnant since 2003. A far better approach is tobacco harm reduction. How about we just start telling the truth for a change. I for one have enough faith in the people of this country that, once given the the facts about reduced harm products like snus and electronic cigarettes, people will make good choices for themselves.