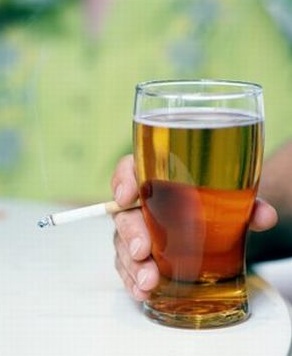 Since international tobacco companies have also owned alcoholic beverage companies, tobacco documents yield information about the inner workings of the liquor industry. Researchers studying tobacco documents have found that liquor companies are terrified of going down the same route as the tobacco industry. An article published in the Australasian Medical Journal found that the top concerns of the international alcohol industry were: alcohol becoming a major public health issue and the focus of negative attention, like tobacco; tax increases; mandatory health warnings on alcoholic beverages; regulations on advertising and sponsorship; tougher policing for drunk drivers and lowered blood alcohol limits; litigation; well-funded, independently-run mass media public education programs about alcohol; people viewing alcohol as the cause of problems for the community rather than just "addicted individuals"; and raising the legal drinking age. The industry tries to play down its role in contributing to alcohol problems and opposes the lowering of blood alcohol levels for drunk driving and raising the legal age of drinking.

France has been much more efficient at curbing smoking than drinking alcohol.

Two decades ago, the state was still a major shareholder in the leading tobacco company. It sold its stakes to Spain, drastically increased taxes, and that was the start of it.

Big Booze in France is a different story with major global players (like Big Tobacco), but also networks of small producers and local independent brands, along with very deeply rooted associations. There is clearly a difference between wines (including cognac, champaign) and other alcohols (ie beer, liquors), and usually major players don't play in both leagues. From a marketing and lobbying point of view, two positionning : "luxury / cultural identity" vs "mass market / agrobusiness". Employment is a major argument for both, but the former have an easier time getting their point, leveraging on gallic pride.

I think we may see the same split in Australia (wine producers / Big Beer ?).

In France, after a major set of regulations, about 20 years ago, advertising was banned from TV, and a very mild recommandation for "moderate drinking" implemented. But over the past decade, nothing moved, except in the wrong direction (ie many attempts to get rid of restricting laws).

The whole notion of the government trying to tax us for things that they find morally reprehensible is ridiculous, and nothing but another way for them to gain more control over our personal lives. We live in an age of gov induced hypersensitivity, and now any little annoyance that is able to be stigmatized w/ propaganda is indulged as a legitimate problem. Pretty soon they're going to start persecuting ppl for wearing white, since it reflects light the best and technically would put the ppl around them at a greater risk for skin cancer. Yea, it's ridiculous sounding, but the logic is exactly the same as ppl that can't stand being around smokers. The government is the one instilling a sense of corporeality and attachment to our bodies, which is just another exercise in using fear (the only thing that governments are good at) as well as an attempt at preserving our bodies to increase productivity to the state (what other governments were health nuts for this same reason? oh yea, the nationalist socialist party). The same goes for the way the gov targets certain items to hike up the taxes on, such as "sin taxes." Like almost all laws passed in this country, there's always some corporate bullshit behind it. I took a free smoking cessation class back when I was in college, and it seemed like they legitimately wanted to help me until they started throwing expensive teeth whitening products at us at the end. (I remember one of the brands was malibu bright, which is by no means a cheap complimentary toothbrush if that's what you were picturing). They should just call it "the government needs an excuse to take more of our money" tax.