Obama's Netroots Goes to the Dogs? 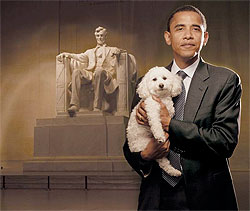 Netroots activists who supported the Barack Obama campaign thought they were joining "a new political movement that would be mobilized for big goals -- to end poverty or fix the healthcare system, or maybe to end the U.S. reliance on foreign oil," writes Peter Wallsten. Some are disappointed by what Wallsten describes as an "often secretive debate ... among top campaign staff members over how to refashion the broad network of motivated volunteers into a force that can help Obama govern," and by a seeming focus on more trivial goals. Last week, for example, Obama's campaign manager sent out an email calling on people to "Support your local animal shelter to give animals in your area a chance." James Dillon, who volunteered for Obama, says, "I'm not trying to discourage anyone from helping animals, but there are a lot of people hurting right now. If this movement is going to sustain itself, it has to have as grand a mission as electing Barack Obama." Micah Sifry of TechPresident.com has also warned that "by leaving people in the dark and only conducting one-way consultation on the movement's future, the Obama campaign risks losing its most vital resource: its grassroots base." (January 2009 update: see Organizing for America for new developments on this. )