Lobbyists, Register with the President 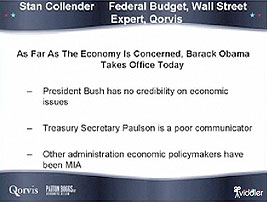 "President-elect Obama is already backing off his pledge not to hire any lobbyists to serve in his administration," reports Shawn Zeller. "But one prominent hired gun -- Stuart Pape, managing partner at the biggest lobbying firm in Washington -- expects that Obama will soon after taking office set new disclosure requirements for lobbyists trying to influence executive branch officials." Pape spoke at a briefing sponsored by his firm, Patton Boggs, and Qorvis Communications. Pape also pointed out that the Obama campaign's "brilliant plan" was so "well executed" that it has raised expectations for real change. "You saw the enthusiasm of people, not just in the United States but all over the world last night," he said. "It was an outpouring of emotion and hope that I don't recall seeing since John Kennedy was elected president. But that puts an enormous amount of challenge in front of the president-elect to ... meet those expectations." According to Darryl Nirenberg of Patton Boggs, the incoming U.S. Congress will also feel pressure to deliver "early achievements" by quickly passing "items which they believe will be popular and somewhat easy to get through the House, such as health care SCHIP, energy policy attacking big oil," and "regulatory changes for financial institutions such as an investor and shareholder bill of rights."