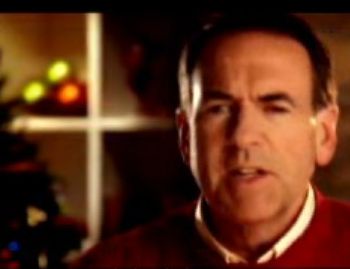 Republican presidential candidate Mike Huckabee defended his controversial "Floating Cross" Christmas ad against charges that he is leveraging religion to boost his campaign, but journalists trying to understand how Huckabee's religion would affect his policy decisions have largely come up empty. Journalists from Mother Jones magazine seeking copies of Huckabee's past sermons were told by Huckabee's campaign workers that they were "not able to accommodate" requests to see copies of Huckabee's past sermons. A church where Huckabee once served as pastor told the reporters that most of the archived copies of his past sermons were "lost during a remodel," and the rest were "not available to the press." So how can citizens find out how Huckabee's faith might affect his policy decisions? History gives some clues: In 1997, then-Governor Huckabee refused to sign a flood relief bill because it called devastating natural phenomena like floods are tornadoes "Acts of God." Signing such a bill, Huckabee said, would violate his conscience, since he disagreed with saying that "a destructive and deadly force" was an "act of God." Also in 1997, on the eve of a triple execution in Arkansas, Huckabee was asked on a radio call call-in show about his position on the death penalty. Huckabee responded, "Interestingly enough, if there was ever an occasion for someone to have argued against the death penalty, I think Jesus could have done so on the cross and said, 'This is an unjust punishment and I deserve clemency.' " But since he didn't ask for clemency, Huckabee's argument follows, the death penalty is just fine.

squint, and keep them focused on the "cross" for 15 minutes, and you'll see it:

It is unbelievable to me that that moron is doing so well in the polls. Just how simple minded and easily manipulated can the U.S. public be? Many people thought Reagan was the end of the world, and then Bush. I SWEAR that if the huckster wins the presidency, I am going to renounce my US citizenship and join the Lakota Sioux!