Bush a Uniter -- of Iraqis, Against the U.S. 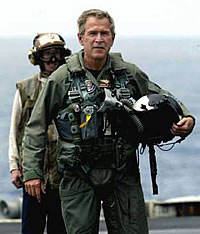 The PR firm outed in 2005 for planting U.S. propaganda in Iraqi newspapers is still in Iraq, working for the U.S. military. The Lincoln Group, "which has conducted surveys for the military since shortly after the invasion, received a year-long contract in January to conduct focus groups," reports Karen DeYoung. The focus groups interviewed "separate groups of men and women ... in Ramadi, Najaf, Irbil, Abu Ghraib and in Sunni and Shiite neighborhoods in Baghdad." When asked to describe "the current situation in Iraq to a foreign visitor," most Iraqis "would describe the negative elements of life in Iraq beginning with the 'U.S. occupation' in March 2003," according to a December 2007 report. So few participants mentioned Saddam Hussein that the report states, "the current strife in Iraq seems to have totally eclipsed any agonies or grievances many Iraqis would have incurred from the past regime." The Iraqis interviewed had "far more commonalities than differences," including that they "see the departure of 'occupying forces' as the key to national reconciliation."