Praise the Lord and Pass the Prosperity | PR Watch

Praise the Lord and Pass the Prosperity 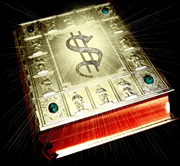 Iowa Senator Charles Grassley (Republican-Iowa) is investigating reports of lavish spending by Christian televangelists, including Joyce Meyer, Kenneth Copeland, Eddie Long, Paula White, and Creflo Dollar. Many of the TV preachers are proponents of prosperity theology, which teaches that financial wealth is evidence of divine favor -- thus explaining why they dip into the donation box to buy themselves multi-million-dollar homes, luxury cars, private jets and other "blessings from God." Faith healer Benny Hinn, another televangelist targeted in Grassley's investigation, is using Ronn Torossian of 5W Public Relations as his spokesman. Torossian, who also represented Hinn earlier this year when he came under investigation by the IRS, stated that his client is obeying all relevant laws.

Ol Anthony from Trinity down in Dallas has been reporting this for years, he has some fantastic cartoons of the
boys in the planes.

Today sadly ABC joins in another fake news
busted with the boys on the bench story
real actors simulating news. I guess its bedtime
for Uncle Charlie Gibson, maybe Katie needs another
seat.

Michelle Malkin - You don't have to be a Harvard University researcher to figure out that the media is infected with liberal bias — or to realize some left-wing journalists will use any means necessary to create ideological narratives that fit their worldview.

On Monday, the local Fox affiliate in Birmingham, Ala., blew the whistle on an ABC News sting operation intended to elicit bigoted responses from local residents. The national ABC News program "Primetime Live" hired actors to pose as same-sex couples and engage in public displays of affection on a park bench.

Here's what Michelle Malkin is talking about: ABC News has been doing a series now for two years called "[http://abcnews.go.com/Primetime/Health/story?id=1150515&page=1 What Would You Do?]" in which they stage some ethically challenging situation, film people's behavior, and then ask they why they did it. Apparently Malkin didn't find this worthy of comment when the staged situations involved potentially abusive situations between heterosexual couples or shoplifting in a convenience store, but her rant-about-bias trigger goes off when the situation involves same-sex couples kissing.

Here are links to the Fox News stories that Malkin mentioned (but didn't bother to link to):

You'll notice that nothing in the original story has anything about Dan Rather, the National Guard, George W. Bush, or conservatives for that matter. Those parts are all embellishments by Malkin so she can sandwich this into her own ideological frame and make this a story about how "the liberal media persecutes conservatives."

As for whether any bigots bit, the stories quote a local police officer who says he got a few complaints from people who were disgusted by seeing men kissing, but the officer himself said the behavior was legal, and he didn't have a problem with it.

FYI, the southside of Birmingham has a significant gay and lesbian community, which is probably one of the reasons why ABC chose it as a location to set up their operation.

As for whether this is "news," I'd say it isn't, but I wouldn't call it "fake news" either. ABC isn't pretending that it isn't staging these situations. The situations themselves may be faked, but ABC's actual reporting isn't. I don't know what to call this -- some form of "reality TV"?

Whatever you call it, I think it's a fair critique to say it blurs the boundaries between news, commentary and entertainment.

I used to to think it was funny when I was 15 years old and Alan Funt was doing it. This is simply a more mean-spirited version of that genre masquerading as news. How can they call it "news" when the intention is to provoke, not report?

But come to think of it, it doesn't have anything to do with prosperity theology either.

I am a christian myself, of a more moderate persuasion, and i have no use for TV preachers. They seem to be a lot of phonies, with the possible exception of Billy Graham. The problem I have with prosperity theology is that the Lord certainly didn't see fit to enrich Jesus in that way, or any of the apostles for that matter. Where did they get this idea? I've read all thru the gospels, and I can't figure out where they got it. Maybe they're worshipping a different god--like, can we say, Mammon?