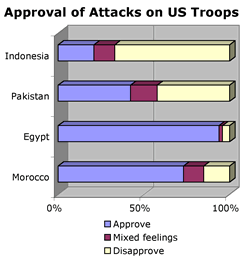 An in-depth poll of Muslim countries has found that large majorities believe undermining Islam is a key goal of U.S. foreign policy. Most want U.S. military forces out of the Middle East, and many approve of attacks on U.S. troops there. "While U.S. leaders may frame the conflict as a war on terrorism, people in the Islamic world clearly perceive the U.S. as being at war with Islam," said Steven Kull, editor of WorldPublicOpinion.org. However, respondents strongly oppose attacks on civilians. Large majorities approve of many of al Qaeda's principal goals, but believe its violence against civilians is "violating the principles of Islam."

many muslims born in the UK since Sept 11 lives have changed, since the country has become islamaphobia and think every one is a terrorists many muslims have been victimised by security services who do not want educated muslims to have professional jobs and would perfer if they had lower standard jobs such as working in a call centre or were a teching assistants than teachers even though they may bring positive help and approach to the way security services view muslims

muslims who are british like where they are but because they have been pushed away, marginalised and isolated, many young muslims feel fustrated and then rebel. The security services are to blame since some political parties are their lap dogs and do not really give a damn about where these young muslims end up