Sarah Olson Reports: Opposition to the War Growing Among Troops 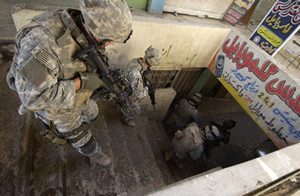 It was Sarah Olson's reporting on military opposition to the war in Iraq that made her a target of an Army subpoena. That hasn't deterred her from continuing to report on the subject. She writes, "'I joined the Army to go to war, and now I’m fighting to get out,' says Pfc. Ryan Follan, laughing nervously. He quickly becomes serious. 'Some of the causes are good, but I don’t think the war is for the right reasons.' ... Private Follan is standing in a Taco Bell parking lot just outside Fort Stewart in Savannah, Georgia. ... On this particular day, the soldiers at Fort Stewart have visitors. ... Veterans for Peace members say they’re not trying to pressure GIs to resist war. They want to educate soldiers about their rights."