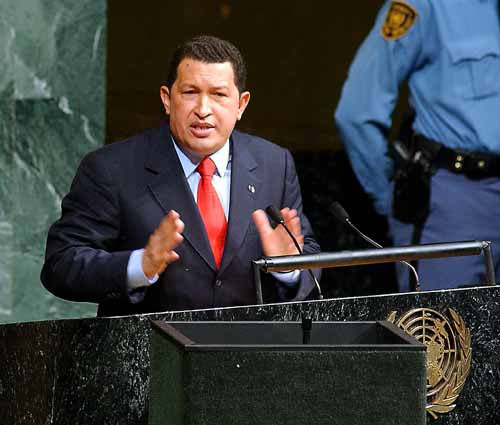 Venezuelan president Hugo Chavez will not renew the broadcast concession of Radio Caracas Television's (RCTV's) current owners. José Miguel Vivanco of Human Rights Watch called the decision "clearly a case of censorship" meant "to punish a medium for its opposition to the government." The Venezuelan government has faulted RCTV's racy telenovelas as indecent daytime programming and says the TV station actively supported the 2002 coup, which resulted in several deaths. RCTV "encouraged the [2002] protests and, once Chavez was ousted, celebrated his removal," reports the Washington Post. "But when the interim government that replaced him began to collapse, RCTV and other stations blacked out the news -- which the government says was done to keep Venezuelans from rising up against the coup organizers." Writing from Caracas for CounterPunch, George Ciccariello-Maher says the non-renewal "is simply not about free speech." Venezuela's "media responsibility law" is in line with broadcaster responsibilities in other countries, he says. Ciccariello-Maher also points out that RCTV "broadcasts will continue," but its concession "will instead be granted to either another private corporation, a mixed public-private corporation, a collective of workers, or some other combination."