Who's Intimidating Whom? | PR Watch 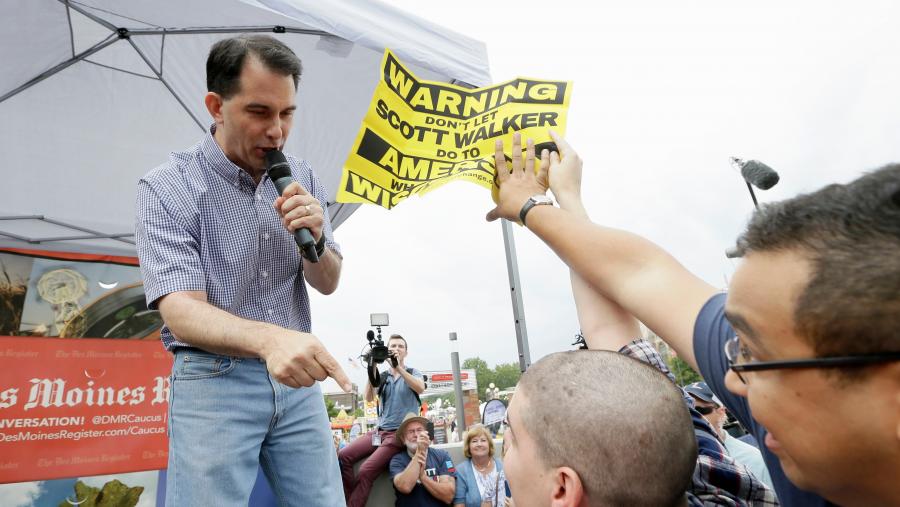 The cheerful cheddarheads who showed up at the Iowa State Fair "Soapbox" to razz Scott Walker got a rude reception. The Soapbox is a Des Moines Register tradition and peaceful protesters have long been a part of this exercise in free speech. But after Walker was punked by two young people with a fake $900 million Koch check weeks ago, Team Walker seems a bit tense. At the Soapbox, Walker supporters ripped a sign out of one protester’s hand which read “WARNING Don’t let him do to America what he did to Wisconsin.” Another protester told CNN ”I got pushed into a disabled woman. I fell on her wheelchair. She started screaming at me."

Of course the cheeseheads were quite familiar with this type of treatment. Following weeks of peaceful protests in 2011, which regularly generated over 100,000 in the streets but resulted in a tiny number of arrests, Walker's allies enacted new rules to limit free assembly in the people's house. Starting in late 2011, Walker's capitol police arrested hundreds of people at the State Capitol, including “Raging Grannies,” teenage girls, musicians, and journalists. The draconian permitting rules applied to them were later held to be unconstitutional, but only after hundreds had been cuffed and hauled off. Team Walker also issued new rules banning cameras, recording devices or even computers from the legislative galleries lest the public catch the politicians napping.

Even though it looks like Team Walker was doing the intimidating in Iowa, the event gave Walker another opportunity to say he was “unintimidated." While Walker continues to treat unions as if they were as grave a threat to America as ISIS, the latest polling shows that nearly six in 10 Americans have a favorable view of labor unions, and that number is growing as the U.S. economy continues to stutter.

I seems as if every time Walker doesn't like something he creates a new law prohibiting it that is passed by his puppet legislature. We also have a repressive legislature, but thank goodness we at least have a governor that vetoes all the nonsense. I feel for you Wisconsinites.

CMD-You MUST get your reports on mainstream media! Who actually decides what stories these network anchors report!?

He's been punked twice with fake Koch bribes. How stupid is he???????

He doesn't need to be smart, just a useful idiot. It's preferred by the American fascists working the ropes behind the scenery.