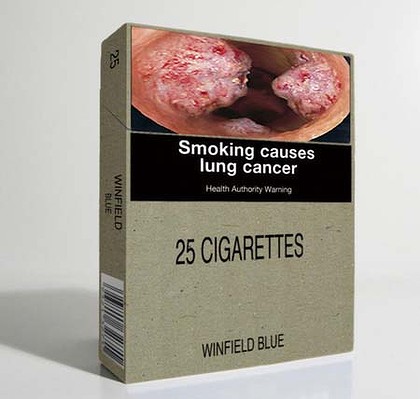 Earlier this year, Australia became the first country to announce plans to make tobacco companies use plain, uncolored cigarette packs with few or no logos that bear only graphic health warnings. The law is scheduled take effect July 1, 2012, but cigarette maker Philip Morris (PM) is resisting the measure. A cache of emails and documents delivered to the Sydney Morning Herald reveal that PM is funding the Civic Group, a public relations firm, to coordinate a new front group, the Alliance of Australian Retailers, to stop the plain packaging rule. So far PM has spent AU $5.4 million on the previously-secret "third party ally" campaign, and plans to spend $3.97 million more. The front group is trying to create the appearance that owners of small shops, service stations and "milk bars" -- small stores where people pick up items like milk and newspapers -- oppose the law on grounds that it will "cause delays" and "undermine convenience." The mastermind behind the front group campaign is Chris Argent, Director of Philip Morris Corporate Affairs, according to the emails. Companies use cigarette packs as a promotional medium to reinforce the brand imagery that sells cigarettes. Pack designs link to advertising that communicates aspirational traits like elegance, health, coolness, femininity, machismo or freshness. The plain-packaging law removes another avenue through which tobacco companies promote their products, and could has a positive impact on rates of chronic, tobacco-caused diseases.

Interesting! This is another bold move by the new Australian government! I think the plain packaging campaign is a very ingenious way to deter new smokers from picking up the habit. As a habitual smoker myself, I don't think the plain package will make much of a difference to the prevailing nicotine addicts.

It will be interesting to see if Chris Argent's campaign to oppose this will work out. I think his grounds for his campaign are quite weak, but his relatively big budget will add some weight to it.

who the hell does Philip Morris think he is. trying to overrule a country now with his pathetic clauses. someone has to bring an end to this madness.