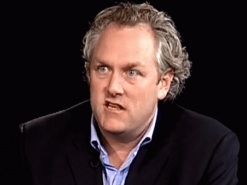 After the media exposed conservative blogger Andrew Breitbart's smear of former Agricultural Administration employee Shirley Sherrod as race-baiting, Media Matters listed a string of other sensationalized stories Bretibart has spread that he based on sheer speculation, gross distortions and outright falsehoods. In addition to the recent episode involving a heavily-edited video of Sherrod, Breitbart also gave rise to a fake nationwide ACORN "child prostitution" investigation, leveled an anti-gay smear campaign against Department of Education employee Kevin Jennings, broadcast yet another selectively-edited video made in conjunction with James O'Keefe (the slice-n-dice right-wing videographer who tried to frame ACORN) claiming that Census supervisors encouraged federal employees to falsify their time sheets. Last year, Breitbart claimed on his Web site, BigGovernment.com, that "Transvestites, Mao and Obama Ornaments Decorate White House Christmas Tree." Breitbart also posted a video on September 29, 2009, that he claimed showed community organizers praying to President-elect Obama. The video bore captions that read, "Deliver Us Obama" and "Hear Our Cry Obama," suggesting a crowd of people shown in the clip who belonged to the group the Gamaliel Foundation were praying to Obama.

It was not a "decades-old video of Sherrod" as your story states. Although the incident she refers to was decades ago, the speech was videotaped earlier this year at an NAACP event. Your credibility is suspect if you do not check your facts.

You are right, the video was not decades old. Rather the experience Ms. Sherrod spoke of took place several decades ago, in the mid-1980s. The video was, in fact, shot in March of this year as she told the story of that time. The mistake has been corrected. http://www.naacp.org/news/entry/video_sherrod/
Thank you for bringing this error to our attention.
Anne Landman