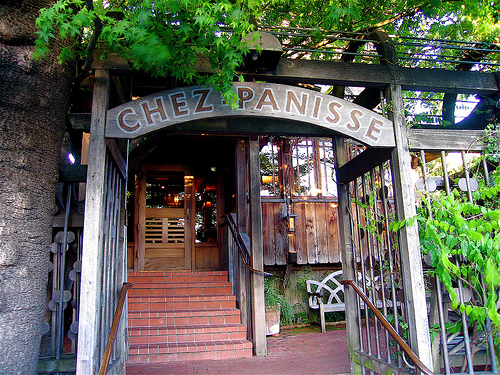 It is happening on April Fool's Day, but it is no joke. The Organic Consumers Association, upon whose Advisory Board I serve, is picketing chef Alice Waters' world famous Chez Panisse Restaurant, Cafe and Foundation offices in Berkeley, California, over the noon hour on April 1, 2010. The protest is a direct result of the growing controversy in the Bay Area where the City of San Francisco, through its Public Utilities Commission, has been giving away and selling thousands of tons a year of toxic sewage sludge to be put on farms and gardens. The nasty entropic stuff, filled with a potential stew of thousands of chemicals and microbes, has even been bagged by the PUC as "organic compost" and used by unsuspecting victims who would never have intentionally put sewage sludge on their home or school gardens.

What has this got to do with Alice Waters and Chez Panisse? Francesca Vietor, the Executive Director of the Chez Panisse Foundation, whose mission is to promote Edible Schoolyard organic gardens, is also the Vice President of the Public Utilities Commission.

The PUC is refusing to permanently end their sludge give-away, nor agreeing to clean up the gardens already contaminated with the sewage sludge, as the Organic Consumers Association and the Center for Food Safety have asked.

Ronnie Cummins, the director of the OCA, sent Alice Waters a letter on March 23 asking her to speak out strongly against growing food in sewage sludge. On March 30 Alice refused. Cummins' letter to Waters reads in part:

Considering that the sludge was given to several local schools for use on their educational gardens, your work with the Edible Schoolyard should especially elicit your concern. This is certainly in direct opposition to the standards that Chez Panisse Foundation and the Edible Schoolyard encourage and uphold. It seems to us a clear conflict of interest that Francesca Vietor should serve as both the Executive Director of the Chez Panisse Foundation and the Vice President of the PUC. In light of your dedication to non-GMO foods, would you have the Vice President of Monsanto as your Executive Director? The two do not seem much dissimilar as both work for organizations that compromise the integrity of the movement for which you are both a pioneer and a leading voice.

I have been involved with the organic garden movement for 40 years. I believe in the transparency of public institutions and count on the government to offer the highest standards outlined by the Organic Consumers Association and other reliable advocates. I look forward to reviewing the science and working with the SFPUC to ensure the safety of composting methods. I support Francesca Vietor, Executive Director of the Chez Panisse Foundation and a PUC commissioner, whose environmental work I have admired for many years and whose integrity has been questioned.

In the news release announcing the picket at Chez Panisse, Cummins responds:

I, too, am stunned that Alice Waters has gone to bat for growing any food in sludge. Obviously, she is extremely close to Francesca Vietor, and indeed Vietor has been handling this issue for Waters since early February when the OCA invited Chez Panisse Foundation to join its call to the Mayor and the PUC to stop its sludge give-away. But politics make for strange bedfellows, and deep personal friendships can often blind people to what from the outside appear to be rather obvious conflicts of interest. Is Alice Waters' Chez Panisse Foundation committed to promoting organic soils, pure foods and healthy diets, and is there really a place in that for growing food in toxic sewage sludge?

I am strongly on the side of not growing any food in toxic sludge. My 1995 book Toxic Sludge Is Good for You blew the cover off this outrageous "biosolids" scam. Unfortunately, 15 years later, the scam continues. Now sludge is deceptively promoted as "organic compost" and still fooling people, even natural food icons.

John Stauber in an independent writer and activist whose opinions are his own.

i happened to see the article about biosolds being sold to SF literally THE day after reading "toxis sludge is good for you". the worst part of it was a quote by gavin newsom that said something like "i would definatly eat food grown in these biosolids" followed im sure by a shiny white grin, which just made the BS alarm ring so loud in my head. whats even worse is that he wants to tax soda cause its "bad for you", but willing smiles a shit-eating grin (literally) when it comes to something as potentially dangerous to a huge swath of people as toxic sludge on our "organically grown" food. ESPECIALLY since its also for schools. who KNOWS what will happen to the kids who eat these vegetable from pre-k to senior year. its scary when even SF is so easiy duped! we ban plastic bags and smoking basically everywhere but dont notice whyneout toxic waste is being sold to us as "organic". maybe its not that we dont notice, its just that we fight the little pointless fights cause those in charge know it will let them do whatever they want with the bigger picture (money and control, anyone?)
I really hope everyone has done their homework and have researched this thing to the fullest. The one thing Americans suffer from the most is hearsay that leads to accusations that in turn leads to the breakdown of our social strength. We can sit here, and I assume we are all sitting, we can read this and instinctually say to ourselves that we would like to believe that no one in their right minds would be supportive of this toxic sludge. I would go ahead and bet lots of things that I probably shouldn't, and say that Chef Waters probably thinks like most humans and has no intent of harming anyone and certainly has more to do than to watch over government officials. People, we are being screwed by a much bigger villain than Chef Waters. I know that you think that you have to start at the bottom to reach the top, but crap runs downhill. The next time you decide to picket someones business make sure you research the company that made the paper you wrote your tiff on and you may want to research the wood that's holding that sign up in the air so proudly. Then make sure that the person you attack was given all the information you have and vice versa. Otherwise we're just making enemies rather than unifying an already failing network of humanity. Exercise every rational attempt to communicate before you attack someone, that way you're not just two poles on opposite ends, but humans using the power of communication, compassion, and commonsense. I hope this helps everyone.
What would help is if you who are concerned contacted [[Alice Waters]] and [[Francesca Vietor]] at the [[Chez Panisse Foundation]] and asked them to disassociate themselves from the [[SFPUC]]'s promotion of growing food in toxic sewage sludge, and the outrageous scam of pawning this dioxin-contaminated hazardous material off on local organic gardeners as "organic [[biosolids]] compost." Go ask Alice and her foundation to take a strong stand that is in accord with the National Organic Standards Act, opposing the growing of food in toxic sludge. Alice Waters claims to be a leader in these issues. She needs to prove it. And Francesca Vietor has a clear conflict of interest in wearing two hats, VP of the SFPUC, the agency conducting this scam, and head of the Chez Panisse Foundation, promoting organic schoolyard gardens. She has effectively married Alice Waters to the sludge promoters at City Hall.
When the subject of 'toxic sludge' comes up, a number of thoughts come to mind. Amidst same can be some comparatives if you will and I would readily compare Alice Waters of and by her beyond imperious, pretentious, wholly conceited, narcissistic and beyond ruthless and self-serving persona to be nothing short of human toxic sludge. At a minimum. Talk to anyone who is clearly real and down-to-earth in the Bay Area alone involved in the restaurant trade and you will never get a single compliment regarding Waters, to the contrary........., you'll get an earful of appropriate invective. Waters has always been the pretentious fraud, the ignorant dilettante who has, in addition to her mirror, mirror on the wall shameless and arrogant self promotion seen food as something esoteric and eclectic, not real. And it shows. Tragic that so many hopped on her bandwagon and follow her hand to mouth. Personally, when I'm hungry, I grab what's there or go someplace where everyone, from ownership on out is firmly planted on the ground, not some pathetic me, myself and I high wire act that is, to be sure, beyond toxic on every level.