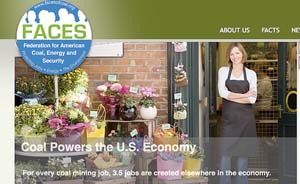 The recently launched coal industry front group, the Federation for American Coal, Energy and Security (FACES of Coal), has been in the news for its ties to a PR firm, the Adfero Group. The Adfero Group states on its website that it specializes in developing strategies for clients to "influence policymakers and shape legislation or regulations at the federal, state and local levels." An environmental group that watchdogs the coal industry, Appalachian Voices, notes that "all of the “FACES” of coal are actually just istockphotos. They couldn’t even get real photos of their supporters." Appalachian Voices has identified six photos used on the front group's website that have be bought from an online stock photo collection. One of those used on the group's front page is listed in the photo library as "woman working at flower shop smiling." On the FACES of Coal website it is overwritten with the statement "Coal Powers the U.S. economy".