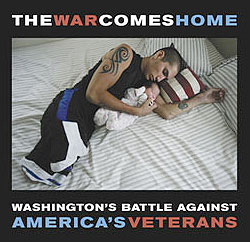 Aaron Glantz, who covered the U.S. occupation of Iraq in his 2006 book, How America Lost Iraq, has written a new book that focuses on the government's neglect of returning soldiers. Titled The War Comes Home: Washington's Battle against America's Veterans, it has been praised by Publisher's Weekly as "a breathtaking rebuke to government hypocrisy and an overdue contribution to gaining critical public awareness of this official neglect. Glantz ... offers a thorough account of the plight U.S. vets face back home -- from the understaffed Veterans Administration perversely geared to saving money at the expense of vets in dire need of help, to concomitant medical and social ills, including undiagnosed brain injuries and the too frequent perils of homelessness, crime and suicide. There is also grassroots resistance and mutual aid, including the eventual passage of the post 9/11 GI Bill of Rights in May 2008, fiercely opposed by the Bush administration and the Republican Congress (including John McCain). Glantz fleshes out his narrative with the voices and powerful stories of vets, their families and advocates, while helpfully including a host of resources and services for veterans." Glantz also edited another recent book that focuses on soldiers' experiences in their own words, titled Winter Soldier: Iraq and Afghanistan: Eyewitness Accounts of the Occupations.