A Flood of Evidence | PR Watch

A Flood of Evidence 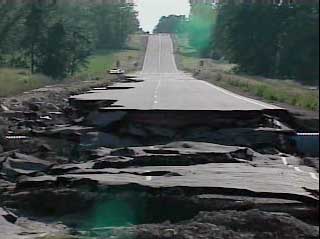 A couple of weeks have now passed since the floodwaters peaked, but water levels seem still to have barely dropped. Large ponds continue to occupy wiped-out stretches of farmland where crops once grew. Just yesterday the Wisconsin Department of Transportation announced that part of Highway 33 near my home has reopened. Parts of the road (the route that I normally travel between my home and the office of the Center for Media and Democracy), were washed away and had to be rebuilt. 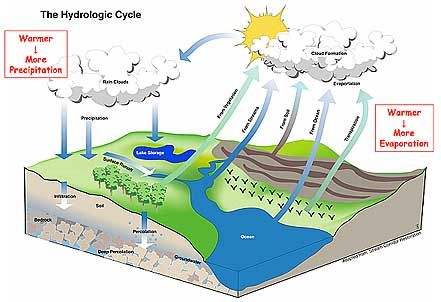 This year's floods fell into the category of what weather experts term a "500-year flood" -- a weather event so extreme that it is expected to happen, on average, only once every 500 years. In recent years, however, these unlikely events have been happening with surprising frequency. The Midwest's previous 500-year flood occurred only 15 years ago, in 1993. Were these specific floods caused by global warming? No one can answer that question with a high degree of scientific certainty, but the pattern certainly is consistent with predictions made by the IPCC and other scientists who study global warming.

Climate scientists are generally very careful to avoid over-interpreting the available evidence. They point out that weather is variable by its very nature, which makes it impossible to prove that global warming is responsible for any single weather event. The most recent report from the Intergovernmental Panel on Climate Change warns that "the often spotty and intermittent nature of precipitation means observed patterns of change are complex" (pdf). For example, global warming is expected to lead to both increased flooding and increased droughts: "Warming accelerates land surface drying and increases the potential incidence and severity of droughts ... However, a well-established physical law (the Clausius-Clapeyron relation) determines that the water-holding capacity of the atmosphere increases by about 7% for every 1°C rise in temperature. ... Because precipitation comes mainly from weather systems that feed on the water vapour stored in the atmosphere, this has generally increased precipitation intensity and the risk of heavy rain and snow events. ... The warmer climate therefore increases risks of both drought -- where it is not raining -- and floods -- where it is -- but at different times and/or places." In May, a lawsuit filed by environmental groups finally forced the White House -- after years of delays -- to release its own scientific report, which admitted that the IPCC's assessment is accurate. 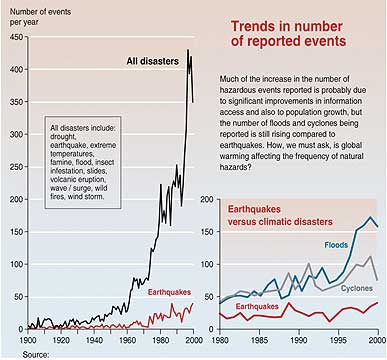 Writing for Newsweek, Sharon Begley notes that it is "almost a point of pride with climatologists. Whenever someplace is hit with a heat wave, drought, killer storm or other extreme weather, scientists trip over themselves to absolve global warming. No particular weather event, goes the mantra, can be blamed on something so general." However, "This pretense has worn thin. The frequency of downpours and heat waves, as well as the power of hurricanes, has increased so dramatically that '100-year storms' are striking some areas once every 15 years, and other once rare events keep returning like a bad penny."

In other words, climate change is affecting people's lives so dramatically that indifference and denial are becoming impossible. Dr. James Hansen, one of the leading scientists involved in raising the alarm about global warming, recently warned that climate change has become a "planetary emergency" that will lead soon to massive species extinctions and "ecosystem collapse" as current trends approach "tipping points that lead to disastrous climate changes that spiral dynamically out of humanity’s control." Hansen will be the keynote speaker at the CSPI conference I'm attending next week.

The panel I'll moderate is titled "Beyond the Phony 'Debate'" because there is little point in rehashing the question of whether global warming is happening or not -- a debate that the scientific community settled a long time ago and even the Bush administration is now abandoning. Instead, we will focus on discussing the actual consequences of global warming, how those impacts can be mitigated, and solutions that meet the world's energy needs while avoiding environmental disaster. Solutions to the climate crisis exist, and the panelists include people who have taken the lead in developing those solutions:

As we move beyond the "phony debate," however, we owe it to ourselves to understand why that debate has continued for as long as it has. John Stauber and I examined this issue in our 2001 book, Trust Us, We're Experts: How Industry Manipulates Science and Gambles With your Future. We pointed out that the basic science explaining how greenhouse gas emissions drive global warming has been understood for decades. However, measures to control emissions of greenhouse gases threaten the long-standing business habits of the oil, coal, auto and manufacturing industries. "They view scientists’ conclusions about global warming with the same interest-driven hostility that the tobacco industry shows toward scientists who study lung cancer," we wrote. "Like the tobacco industry, they have pumped millions of dollars into efforts to debunk the science they hate." Their goal is "simply to stop people from mobilizing to do anything about the problem, to create sufficient doubt in their minds about the seriousness of global warming that they will remain locked in debate and indecision."

A recent study found that 92 percent of the books published by self-professed global warming "skeptics" were linked to conservative think tanks (which in turn have been heavily funded by oil companies and other industries with a vested interested in promoting denial). The study's authors conclude, therefore, that "environmental sceptics are not, as they portray themselves, independent and objective analysts. Rather, they are predominately agents of [conservative think tanks], and their success in promoting skepticism about environmental problems stems from their affiliation with these politically powerful institutions."

Like global warming itself, the "phony debate" exists for a reason. The powerful institutions that created the phony debate have not disbanded or disappeared, and the authors of all those books and op-ed columns are still hard at work manufacturing confusion. In place of absolute denial, industry-funded experts have begun selling half-solutions and false solutions to the problem at hand. Already we are seeing massive industry spending to promote so-called "Clean Coal" and "Clean and Safe" nuclear power.

The danger in these campaigns is that they may divert attention and resources away from real solutions. Disinformation has already delayed the actions needed to avoid a planetary emergency. We can't afford to be fooled again.