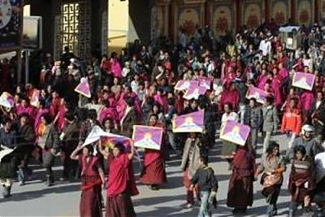 "China has begun to fight back against criticism of its handling of the Tibetan protests," during which protesters have been killed, with a "sustained publicity offensive as well as blocking foreign broadcasters and websites and denying journalists access to areas of unrest," reports The Guardian. "After days of ignoring and then playing down protests," Chinese television stations "aired hours of Friday's anti-Chinese riots in Lhasa." China's English-language TV service was told "to keep broadcasting footage of burned-out shops and Chinese wounded in attacks. No peaceful demonstrators were shown." An international reporter remarked that while the images of injured Chinese are "genuine," they're "not put in context." The Chinese government has also blacked out international TV broadcasts, blocked online videos and censored Internet searches about the protests, reports BBC News. In response, the U.S. government is increasing its international radio broadcasts into Tibet. "Our audience clearly will benefit from these trustworthy sources of news and information, which differ sharply from Chinese government sanctioned broadcasts," said U.S. Broadcasting Board of Governors chair James Glassman.

A code of conduct addressing how major Internet service providers and portal operators should deal with Internet censorship in China is in the final stages of preparation by Human Rights Watch and the providers, the head of the human rights pressure organization said Tuesday.

The code is due in the next couple of months and comes in the run up to the Beijing Olympic Games that begin in August. ...

"One of our concerns is the degree to which the major international Internet companies have become complicit in this censorship of the Internet," said Kenneth Roth, executive director of New York-based Human Rights Watch at a Tokyo news conference.

Robert A. Kapp, a former president of the U.S.-China Business Council, said it's possible that popular anger, particularly among Americans concerned with human rights, may become so severe "that some companies may face a very hard decision as to whether their highly visible support of the Olympics is causing so much damage that they need to reconsider their options."

"I could imagine some companies going back to their advertising departments and external PR advisers and seeing whether there are ways in which the company's presence in support of the Olympics can be reviewed with an eye toward these recent and tragic circumstances," Kapp said.

Yahoo and MSN are supporting the Chinese authorities by posting 'wanted' posters for the rioters on their sites. Two of the 24 on the list have already been caught.
http://observers.france24.com/en/content/20080321-yahoo-msn-used-root-out-tibetan-rioters-china