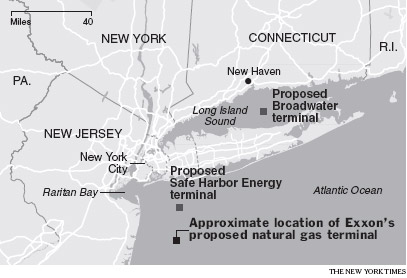 ExxonMobil is moving forward on its plans to build a liquid gas terminal off the northeast coast of the U.S. The proposed site for the project, called BlueOcean Energy, is about 20 miles off the New Jersey shore and 30 miles south of Long Island. Reporter Jad Mouawad describes the offshore placement as "a move meant to deflect safety and environmental concerns about proximity to populated areas." Ron P. Billings, Exxon's vice president for global liquefied natural gas, said, "We have tried to learn from our past experiences and that of the industry in general." The offshore neighborhood is getting crowded since "the Atlantic Sea Island Group, plans to build a terminal for liquefied natural gas on an artificial island about 14 miles south of Long Island, a project called Safe Harbor Energy." CMD reported earlier this year on Shell's successful efforts to co-opt local non-profits through grantmaking. The Shell project, Broadwater Energy, is a joint venture by Royal Dutch Shell and TransCanada.