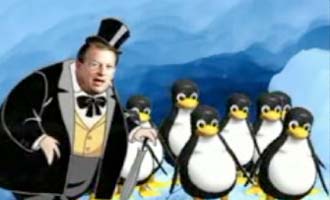 The video "Al Gore's Penguin Army," which belittles the threat of global warming (suggesting viewers "stop exhaling") and makes fun of the former vice-president, has a "home-made, humorous quality." Yet the filmmaker's email links him to "DCI Group, a Washington, D.C., public relations and lobbying firm whose clients include oil company Exxon Mobil," reports the Wall Street Journal. Ads promoting the penguin video appeared to people searching for "Al Gore" or "Global Warming" on the Google search engine, but these ads "were removed shortly after The Wall Street Journal contacted DCI." DCI's Tech Central Station website has also "sought to raise doubts about the science of global warming and about Mr. Gore's film." The firm "declines to say whether or not DCI made the anti-Gore penguin video," but an Exxon spokesperson said they "did not fund" and "did not approve it." What is certain is that "political operatives, public relations experts and ad agencies" are increasingly using video-sharing websites like YouTube to shape public opinion. Ogilvy & Mather "plans to post amateur-looking videos on Web sites to spare word-of-mouth buzz about Foster's beer," and AT&T has used YouTube to post videos against net neutrality.

Other criticisms aside, this video’s (mis)use of the Linux “Tux the Penguin” mascot falls somewhere between rudeness and open copyright infringement.

I even made a video (without corporate support) saying so: “Al Gore’s Penguin Army” Video Misuses Linux Mascot.

There is no issue of copyright infringement.