Non-violence training workshops I attended in the 1980s often featured, as a tension-breaker or wind-down game, a little exercise known as the whoosh.

For the uninitiated, a whoosh consists of one person standing in the centre of a circle of people holding hands. Starting from a low crouch, the circle slowly moves in with the pronunciation of whooooooosh building to a crescendo as the group converges, culminating with an enthusiastic jump. The person in the centre is then considered to have been whooshed.

If such exercises are still in non-violence training workshop manuals, maybe it's time a warning label was added: Never whoosh a spook! 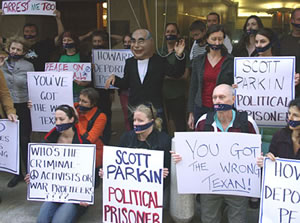 Why? This week the Australian government deported Houston-based peace and environmental activist Scott Parkin, after revoking his six-month visitor visa. No reason was given; for all we know, Scott whooshed some hapless, wet-behind-the-ears Australian Security Intelligence Organisation (ASIO) spook sent to spy on one of the non-violence training sessions he was attending.

Official statements about the case were vague. Australian Attorney-General Philip Ruddock made dark mutterings about "national security." Then the Melbourne newspaper The Age reported sources had indicated that Parkin was being deported because he taught "techniques for preventing police from taking protesters away for arrest."

A spokesman for Ruddock told one of The Age reporters that while Parkin had peacefully protested against the US military contracting company Halliburton, he had encouraged "spirited" protest action.

So, it may well have been a whoosh that got ASIO all fired up.

For his sins Parkin was arrested and then imprisoned for five days. The government refused to tell Parkin or his lawyers what exactly he was accused of.

While Parkin can appeal the decision to the Migration Review Tribunal, the government has one more trick up its sleeve. Under the provisions of the National Security Information Act -- a recently enacted piece of 'anti-terrorism' legislation -- the government can issue a certificate preventing the disclosure of what it believes to be national security information.

While the government may have held all the legal cards, it was losing the public debate as lawyers, civil libertarians, environmentalists and some politicians condemned Parkin’s detention.

Even the Leader of the opposition Labour Party, Kim Beazley, cautiously flagged some concern about Parkin's arrest and requested a confidential briefing from ASIO on its actions. However, he retreated after the confidential briefing, stating that Labour would not oppose Parkin's deportation. He declined to explain why, though -- because it's national security. The party declined even to support the demand that Parkin and his lawyers be informed of what he is accused of. Labour apparently trusts that ASIO had got it right and now wants everyone else to trust them.

Former Australian Office of National Assessments (ONA) analyst, Andrew Wilkie, who resigned over the misrepresentation of intelligence ahead of the Iraq war, suggested the Labor Party had fallen for an old spooks trick he had seen before.

"I sat in on three ONA briefings with the then-opposition leader Simon Crean and on all three occasions, I saw relevant and important information intentionally omitted from the security briefings because they were inconsistent with the government's policies on the issue," he said. "So, I'm not satisfied that Kim Beazley has made an informed decision on this."

Meanwhile, the Australian media's coverage of the issue was making the government uncomfortable. Only days before Parkin's arrest, the government had put plans to introduce even more draconian 'anti-terror' measures on the fast track. Adverse coverage of the Parkin affair risked delaying or sinking these more sweeping measures, which include the ability to lock people up for a 14-day stretch under what is referred to as "preventative detention."

In an attempt to control public debate as much as possible, the government instructed prison officials that journalists were to be prevented from speaking to Parkin. It was a media control measure that had limited success, as friends who visited Parkin carried out a written personal statement which was then widely reported in the media.

Come Thursday morning, Parkin was whisked to Melbourne airport and bundled onto a Qantas jet bound for Los Angeles. A small group of supporters gathered at the airport to protest his deportation. A friend of Parkin's, Iain Murray, told journalists that "there's about as much evidence of Scott representing a threat as there's been evidence found of weapons of mass destruction [in Iraq]".

Adding insult to civil rights injury, Parkin was given an invoice for A$11,700 for the costs of his detention, airfare for himself and the two security guards who the government insisted accompany him, as well as the cost of the guards' acommodation in Los Angeles. Far from being thankful, the guards wouldn't even let Parkin buy himself a beer on his long flight home.

Under Australia's punitive migration law, the Australian government bills those who are imprisoned for the costs of their imprisonment. It doesn't matter if they fled oppressive regimes and arrived without documents or spooked a high-strung spook.

Parkin's Deportation May Backfire on Government

The deportation of Parkin is an ominous portent of how new anti-terrorism powers can and will be used by a government that, as of July 1, has a majority in both houses of the national parliament. It is also a signal of how spooks can’t -- or don't want to -- distinguish between civil disobedience and violent protest. It illustrates how a government will invoke 'national security' in an attempt to justify the denial of basic legal rights and muzzle legitimate public debate.

While the government succeeded in deporting Parkin, and may yet derail his avenues of appeal, there were some hopeful signs amidst the controversy. Where discussion of anti-terrorism laws had previously been a rather abstract debate between government agencies and lawyers, the deportation of Scott Parkin has put a human face on how these powers can be abused.

In the long run it may well turn out that the government's deportation of Scott Parkin was counter-productive to its aims. But in the meantime, non-violence trainers might want to avoid the whooshes, lest a spook take it the wrong way.

There's a bit more background to this found at http://guambatstew.blogspot.com/2005/09/bad-deportment.html
<a href="http://margokingston.typepad.com/harry_version_2/">Webdiary.com.au</a> has been following the Scott Parkin issue and today we published a comment from Scott on the Australian public's support for him <a href="http://margokingston.typepad.com/harry_version_2/2005/10/scott_parkin_di.html#more"> here</a> (sourced from <a href="http://perth.indymedia.org/index.php?action=newswire&parentview=13125">Perth Indymedia</a>).
Hi Bob Senator Bob Brown laid it as bare and raw as he could in the Legal and Constitutional Legislation Committee Estimates hearing yesterday in the Federal Australian Parliament. http://margokingston.typepad.com/harry_version_2/2005/11/asio_questioned.html#more has published the transcript though it doesn't really answer why the spooks were spooked by Scott.
Thanks Kerri - yes heard that it came up. Will add Hansard links in to when I get a moment. Bob
The government again starts to create intrigues. The new program of anti-terror? Huh. Government's last actions has simply nothing to cover the dark affairs, they and have created this stupid "antiterrorist" program. If to think it is very convenient - if you need to remove any person not necessarily him to arrest and then to prove to press that this person it is dangerous not personally to you and represents the international threat. And now all is easier - we specify a finger the person and speak - "He's represent threat of national safety". All are pleased and happy. The world is rescued from terror. With best wishes, "Russian Post" We are always .online for help [http://www.xnetdot.com Xnet RusPost]