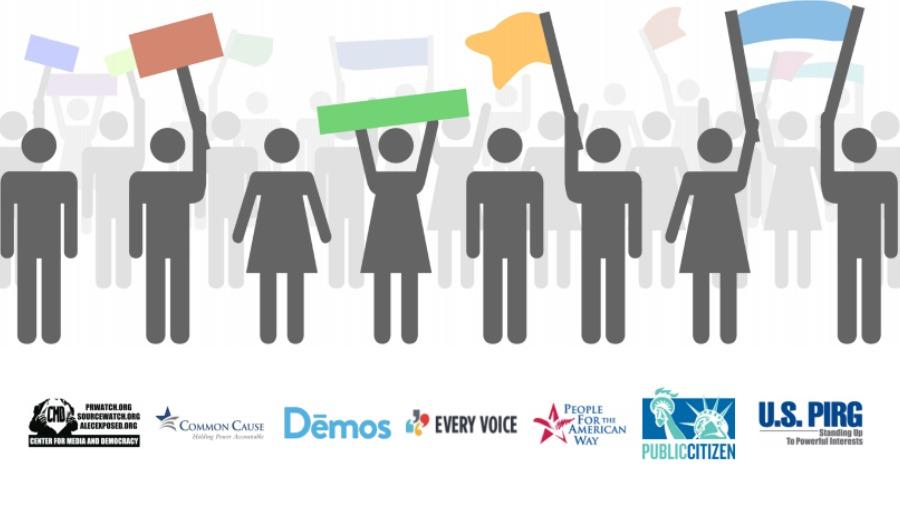 Americans believe in democracy—and they're ready to reclaim it from the wealthy special interests that have grown ever-more dominant since the U.S. Supreme Court's 2010 Citizens United decision.

The overwhelming majority of Americans agree that money has too much influence over elections, and that the system for financing political campaigns needs a radical overhaul.

Over 90 percent of Iowa caucus voters—in both parties—recently told pollsters they are unsatisfied or "mad as hell" about the role of money in politics.

It is a striking consensus that is overcoming partisan divides and sparking civic action across the country, as a new joint report by the Center for Media and Democracy, Common Cause, Demos, Every Voice, U.S. PIRG, Public Citizen, and People for the American Way highlights.

The report, "Our Voices, Our Democracy," concludes that while there's a long way to go, the fight for a truly democratic, transparent, and accountable government won important gains last year. (A PDF of that report can be downloaded below.)

Winning in the Face of a Tidal Wave of Big Money

Record-breaking spending by a handful of wealthy individuals makes the problem seem insurmountable.

But activists and volunteers across the country fought back in 2015, winning some important fights and providing inspiration to pro-democracy activists everywhere.

In Seattle, the goal of citizen-funded local elections brought together a broad coalition of grassroots activists and organizations to put the "Honest Elections" initiative on the ballot. The measure won in a landslide. Nearly two-thirds of Seattle voters said yes to increasing public participation with an innovative program in which registered voters receive "democracy vouchers," four $25 publicly financed vouchers, that they can use to support candidates who agree to follow contribution and spending limits.

Maine voters loved their Clean Elections law so much that hundreds of volunteers and a bipartisan organizational network came together in an off-cycle election year to propose a ballot referendum to expand it: strengthening public financing, tightening requirements for donor disclosure, and increasing penalties for candidates that violate the law. The ballot measure passed handily.

These wins are part of a broader democracy movement that has been building since Citizens United. Over 5 million people have signed petitions calling for a constitutional amendment to reverse Citizens United. Sixteen states, more than 680 cities and towns, and a majority of the U.S. Senate in 2014 have called for an amendment.

As the "Our Voices, Our Democracy" report makes clear, no single legal or policy change will win the fight for democracy overnight. Successfully fighting big money in politics will take concerted, long-term effort by a broad-based movement.

That's why more than 150 groups came together in 2015 to support a "Unity Statement of Principles," which describes the key features a democratic system should have.

With those principles in mind, thirteen leading democracy reform groups developed a set of concrete reforms, and a plan for making 2016 political candidates face the problem of big money.

Key elements of the Fighting Big Money agenda include:

These changes can make a real difference.

Since 2008, for example, Connecticut has had a public funding option in which candidates for state office who raise funds from enough small donors, and abide by spending limits, receive public grants.

By 2014, 77 percent of candidates were using the program, and the benefits to responsive government and engaged citizenship have been impressive, according to a report by Demos. More people are becoming small donors, and more seats are competitive, because more people can afford to run for office. Candidates and elected officials spend less time fundraising and more time interacting with constituents, and they are less beholden to lobbyists and big donors.

The pernicious influence of big money on our political system is set to be one of the major themes of 2016, a presidential election year, and the issue clearly resonates with politicians and voters across the political spectrum.

"I will tell you that our system is broken," Trump said in a GOP debate last August. "When [politicians] call, I give. And you know what, when I need something from them two years later, three years later, I call them. They are there for me. That's a broken system."

In early primary states, organizations like New Hampshire Rebellion and Iowa Pays the Price have seized the moment by successfully using grassroots mobilization to push candidates to address money in politics. While neither Trump nor the other Republican candidates have released official platforms on the issue, several have expressed openness to possible reforms. Both remaining Democratic candidates for president, Hillary Clinton and Bernie Sanders, have policy platforms in line with the Fighting Big Money agenda.

From the 320,000 Washingtonians who supported a 2016 ballot measure to urge a Constitutional amendment overturning Citizens United, to the 79 percent of voters who approved a public campaign financing plan in Chicago, to the million-plus Americans who signed a petition asking for federal contractors to be disclose their campaign contributions, ordinary people all across the country are demanding their rights to open, honest, representative government.

Hello, I though you should know that America is not a democracy. Namely for the fact that in a democracy whenever a law is made, every citizen has to vote on whether or not the law is passed, regardless of the time or day. We don't do that. Secondly, under such a government, the majority always rule and the minorities are always subverted and suppressed. So, based on this information, why would you ever want democracy to expand? Wouldn't you want democracy to be abolished because of its treatment to minorities? Just a thought.
Well, as Churchill pointed out, "Democracy is the worst form of government, except for all the others."