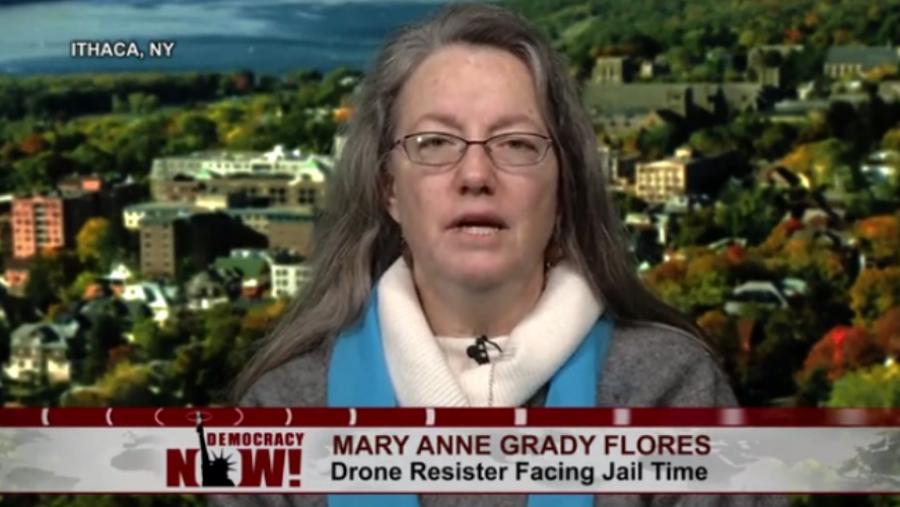 Flores is a grandmother who was convicted of violating a highly unusual order that was issued to "protect" a commander of the Hancock Air National Guard base in upstate in New York from activists who have sought to shine a light on America's controversial drone bombings through gatherings around the base.

She was convicted of violating that protective order by photographing eight Catholic peace activists who spoke out at the base about the drone policy. Flores belongs to the Upstate NY Coalition to Ground the Drones and End the Wars.

A six-month sentence was imposed on her by the courts, making her only the second of more than 100 drone activists to be sentenced to prison. She was recently ordered to report for incarceration today.

The sentence works a particularly personal hardship because she had been taking care of her very ill mother who will need to be placed in hospice care as a result of her primary caregiver serving this sentence.

Meanwhile, armed anti-government militants who have taken over the Malheur federal nature preserve have not been arrested by federal or state law enforcement.

Brave New Films has pointed to this hypocrisy and issued a call to action for concerned citizens: Why does non-violent protest get you sent to prison, while armed insurrection is rewarded with police inaction and national publicity? Please CALL NY Governor Andrew Cuomo (518-474-8390) and tell him to pardon Mary Anne Grady Flores!"

Learn more about Flores and the drone issue at Democracy Now!

Thanks for posting about Mary Anne. I've known her since the Saint Pat's Four Trial & Tribunal. (2003). She is very kind. She puts a lot of her personal energy into working in the public service: Doing direct service work to benefit those in need, without judgment. -- She and her sisters, and their mom, for decades have done jail work, support for unions and working class people. They run soup kitchens, and they put their bodies on the line in order to stop murder and extreme injustice. She comes from a family of Catholic Workers. These people IMO are demonstrating what it is like to live with the values of Christ. If everyone tried to live like the Grady Sisters, there would be no hungry people in this world. I am lucky to know others like this, Craig Stevens, Vera Scroggins, Sandra Steingraber, Swami Dayananda Saraswati (Yogaville), Edmond Cotton. Cris McConkey. These people are my friends, my role models. I think Mary Anne Grady and these others, I think they are modern day saints. I am incredibly blessed to know these people. They embody the values I most cherish.
Honor and love for Mary Anne and her stand for justice and sacrifice and now her time in jail. Comfort and peace to her and may true justice reign and Mary Anne be pardoned soon . It's easier to go after unarmed, non-violent protesters than armed ones....
Whoever is behind this effort, please stop. Mary Anne and her family believe she did nothing wrong, and does not want a pardon. Please respect this.