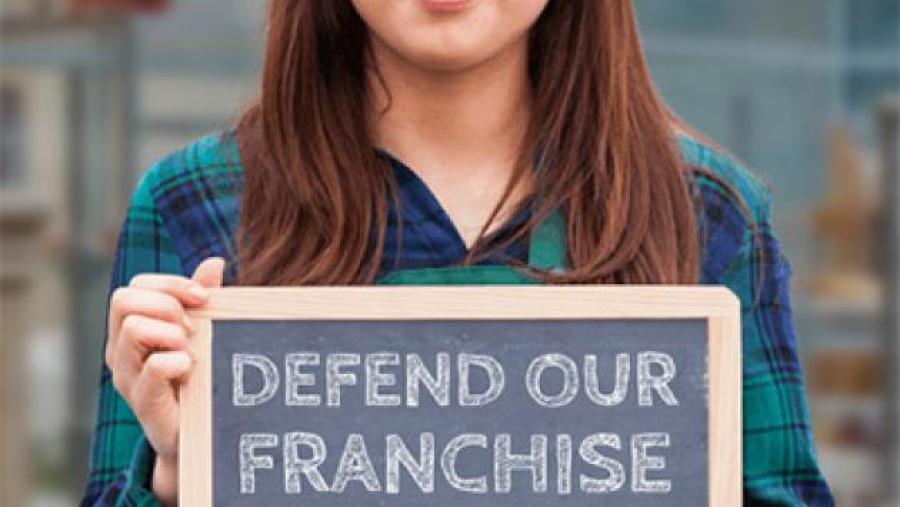 Opening a new front in the multi-pronged corporate attack on working people, two spectacularly misnamed public relations and lobbying campaigns have recently appeared on the scene in Washington, DC, this time taking aim at the relatively low-profile National Labor Relations Board.

January witnessed the arrival of the web and print campaign, DefendMainStreet.com. And appearing just last week was the Coalition to Save Local Businesses, complete with a large board of attractive small business people.

Why are these groups revving up now and what is their goal?

Both campaigns have the NLRB in their sights. The independent federal agency, created during the Great Depression in 1935, is charged with protecting the rights of working people to join together, with or without a union, to improve their wages and working conditions. The board's five members and General Counsel are presidential appointees confirmed by the U.S. Senate.

In a case that could have wide ramifications, NLRB General Counsel Richard Griffin recently took aim at the low-wage franchise business model pioneered by McDonald’s and other fast food giants when he ruled last July that the corporation was a “joint employer” of franchise employees whose labor rights were allegedly violated. If the full board agrees in cases to be heard this spring, it could pave the way for making the corporation, and not just individual franchises, responsible for ensuring that other wage and benefit standards are met, and on the hook for future violations. In short, it would mean that “working at McDonald’s” might actually mean “working for McDonald’s.”

McDonald’s is well known for micro-managing virtually every aspect of franchise operations. Yet the corporate giant has historically been able to absolve itself of responsibility for the poverty wages paid to most “McDonald’s” workers because they are considered employees of the franchisee, not the corporate overseer.

The low-worker-wage franchise model has made McDonald’s a spectacularly profitable corporation. Its top executives made $67 million in compensation in 2012, including a staggering $41.5 million for just the top two. Meanwhile many McDonald’s workers make so little they must rely on public assistance to keep them out of poverty. According to a recent study, workers at McDonald’s were estimated to receive $1.2 billion a year in foodstamps and other taxpayer-funded public assistance. Moreover, seven class action lawsuits were filed against McDonald's last year alleging systematic wage theft of low wage workers.

The same business strategy is used by other giant corporations in fast food and other industries, including hotels, restaurants, quickie marts and, more recently, child care.

The NLRB has made it clear that determining if a franchisor like McDonald’s qualifies as a joint employer will be a case-by-case decision based on the degree of control exercised over franchisees and workers. Nevertheless, the corporate giants and their mouthpieces are clearly spooked and are fighting back.

On January 29, Senate leader Mitch McConnell reintroduced the "NLRB Reform Act" which is geared toward neutering the board and specifically muzzling the General Counsel. Now the giant restaurant and business chains that earn the most from the low-wage franchise model are gearing up legal and lobbying campaigns to mask their identities and true agenda and back the assualt on workers and wages.

DefendMainStreet.org first appeared on January 21 in a national print, television and online advertising campaign. According to the Daily Caller, the initial six-week campaign, intended to “educate lawmakers and the public,” includes television commercials running on MSNBC, CNN, Fox News, and CNBC, print ads in Roll Call, the Washington edition of the Wall Street Journal and select national and regional outlets, as well as the website.

The polished ads talk about the "unelected bureaucrats at the NLRB," and how they have run amok wreaking havoc on tiny Main Street businesses.

Bankrolling this campaign to pre-emptively influence NLRB decision-making is the notorious Job Creator’s Network, the pro-corporate not-for-profit best known for encouraging business owners to pressure their employees to support the corporate political agenda. JCN’s mission, working alone and in concert with the National Restaurant Association, is to "involve employees in the fight to defend free enterprise."

But they do this by advocating for changing the definition of full-time work so more people can be denied health care under ACA, cutting corporate taxes and shrinking entitlement programs, eliminating or suppressing the minimum wage, and promoting so-called "right to work" policies that weaken unions.

JCN’s leadership and board are a “who’s who” of corporate low-wage employers. Former Burger King and Godfather’s Pizza executive Herman Cain, who also served a stint as CEO of the National Restaurant Association, and Home Depot co-founder Bernie Marcus founded JCN in 2011, with Cain using the organization as a platform for his abortive (but often hilarious) 2012 presidential run. Other “main street” “job creators” on the board include Andrew Puzder, CEO of the group that owns the Hardee’s and Carl’s Jr. fast-food chains, former Best Buy CEO Brad Anderson, and Thomas Stemberg, founder and former CEO of Staples. Puzder, a close associate of Mitt Romney, made $4.485 million in salary and benefits in 2012 while average wages for entry-level employees at Hardee’s are at or close to minimum wage.

More recently, trade associations linked to the fight against higher wages have launched the “Coalition to Save Local Businesses.” According to the group’s glossy new website, NLRB overreach puts the franchise model “in peril.” Parroting the “job creator” corporate line, it claims, “upending the current, well-established, joint employer standard would cause uncertainty and disruption for many small business owners, force some small businesses to close and deter aspiring entrepreneurs from opening businesses and creating new jobs.” When you click on the tab about the members, you see photos of smiling franchise owners, a diverse board of small mom and pop shops. But are these the people really in charge?

Coalition “partner organizations” include a laundry list of massive trade groups, who are lobby and legal powerhouses. These include: the American Hotel & Lodging Association and Asian American Hotel Owners Association, who are bringing the lawsuit against the new law providing a higher minimum wage for hotel workers in Los Angeles; the International Franchise Association, which is spearheading the legal fight against the new $15 minimum wage ordinance in Seattle; the National Federation of Independent Business, a pioneer in misnaming as CMD has documented at NFIBexposed.org; the National Restaurant Association, working tirelessly to keep the tipped minimum wage at $2.13 per hour since 1991; the U.S. Chamber of Commerce; and JCN.

DefendMainStreet.com and the Coalition to Save Local Businesses will unleash their razzle and dazzle on Congress, purporting to represent the interests of Main Street businesses intead of giant corporate chains, but out in America, the overwhelming majority of voters think wages need to be raised and 61% of American small business owners agree with them.