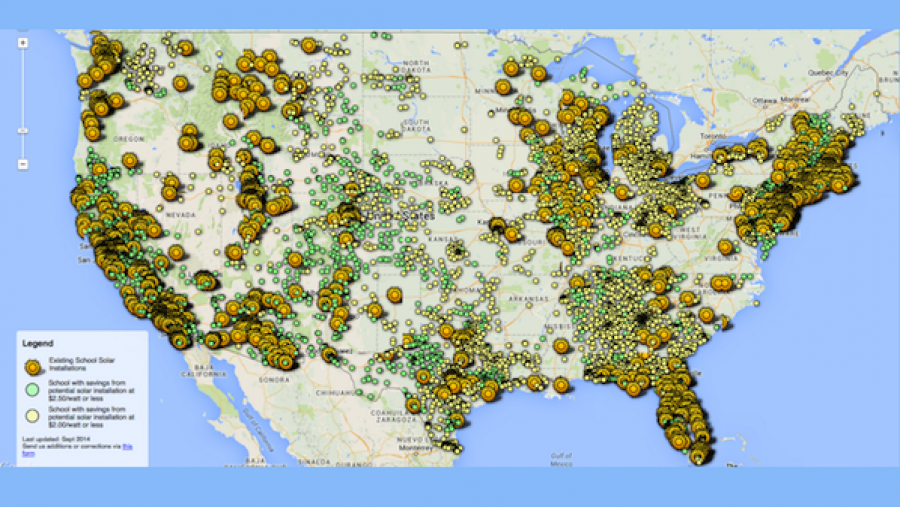 Imagine if every school in our country was powered by clean, affordable, renewable energy. Schools everywhere could have solar arrays on their roofs to power the classrooms, provide important learning opportunities for their students, and save critical tax dollars to reinvest in teachers, textbooks and new technology.

The opportunity for schools to go solar is enormous and thousands of schools have already flipped the switch. According to the recent Solar Schools Census, there are 3,752 K-12 schools with solar installations in the US, meaning nearly 2.7 million students attend schools with solar energy systems.

The momentum toward solar schools is part of the larger movement of people calling for our communities to be powered with 100% renewable energy, a notable and necessary shift away from our fossil fuel dependent economy. This movement is growing with voices of everyday people coming together to build the world that they want to live in.

In North Carolina, a local coalition of education, health, labor, and environmental organizations–including Greenpeace USA–has just kicked off the Repower Our Schools effort to transition public school districts to entirely renewable energy. The groups have started by urging two of the largest school districts in the state, Charlotte-Mecklenburg and Durham Public Schools, to pass resolutions that help protect our communities and environment by committing toward a goal of 100% renewable energy.

Why should schools go solar? The answers are clear.

By switching to renewable energy, schools can save critical dollars on their electricity bills. Of the 125,000 K-12 schools in the country, up to 72,000 schools (about 60%) can install solar systems cost-effectively today. Many of those institutions could see cost savings estimated at more than $1 million over 30 years. The number of schools that can save by going solar will grow in the coming years with expected increases in electricity rates and additional drops in the cost of solar systems.

In North Carolina, for example, electric utility Duke Energy has raised electricity rates three times in the past few years. Each of these increases puts extra burden on schools that are already struggling to stretch their limited funds due to state budget cuts. North Carolina ranks 48th in the country for education spending per student and 47th for median annual salary for teachers. Instead of paying more to Duke Energy, North Carolina schools should be able to invest in their classrooms and educators to support the next generation of leaders.

From 2010 to 2014, the average price of commercial PV solar installations fell by more than 50 percent. Studies are projecting that the cost will continue to drop substantially in the coming years.

Deutsche Bank predicts that by next year (2016) solar will reach grid parity in every state in the U.S., further driving installations. This means that solar can generate electricity that is less than or equal to the price of purchasing power from the electricity grid which is typically fossil fuel and nuclear.

Solar installations also provide critical learning opportunities that are currently lacking for students. As of 2010, less than one-third of U.S. eighth graders show proficiency in mathematics and science. This is especially troubling because seven of the ten occupations projected to grow most rapidly over the next decade are in the science, technology, engineering and mathematics (STEM) fields. Already the U.S. solar industry employs 173,000 solar workers and has more employees than there are coal miners.

By incorporating onsite solar installation into STEM curriculum, students will have hands on experience in today’s booming energy economy that can bridge the education gap.

The health and environmental benefits of schools investing in renewable energy cannot be overlooked. While there has been major progress to decommission coal-fired power plants across the country, the burning of fossil fuels in the U.S. is still a major contributor to air and water pollution, especially greenhouse gas emissions driving global climate change.

These pollutants increase the incidence and severity of cancer, heart disease, asthma and other lung diseases in children and adults. One of the main reasons children miss school is because they suffer from asthma. According to the American Academy of Allergy, Asthma, and Immunology, an estimated 7 million U.S. children have been diagnosed with asthma and more than 13 million days of school are missed each year because of the condition.

This is especially true for North Carolina, where more than 50,000 students across the state suffer from asthma, making it the leading cause of missed school for children with chronic diseases. Renewable-powered schools would reduce air and water pollution in the state and therefore lower health-related absences, reduce the burden of on-site health care professionals, and allow for a healthy outdoor environment that promotes healthy physical activity before, during, and after school hours. What’s more, putting solar on our schools sends a strong message to our leaders and utilities—that our electricity shouldn’t come at the expense of our children’s health or the environment.

The movement of parents, teachers and students calling for renewable energy powered schools is growing. In North Carolina, concerned community members have come together to kick off the Repower Our Schools campaign in Charlotte and Durham. By bringing their voices together, they are confident they can make the change and build the world we want to live in with 100% renewable energy.

Learn more about their efforts at RepowerOurSchools.com and consider demanding your school district be powered by the sun. Stay tuned for more updates from the movement in North Carolina.

Monica Embrey is a Climate and Energy Campaigner for Greenpeace, based in Charlotte.