Selma, Ferguson, and the Right-Wing Backlash 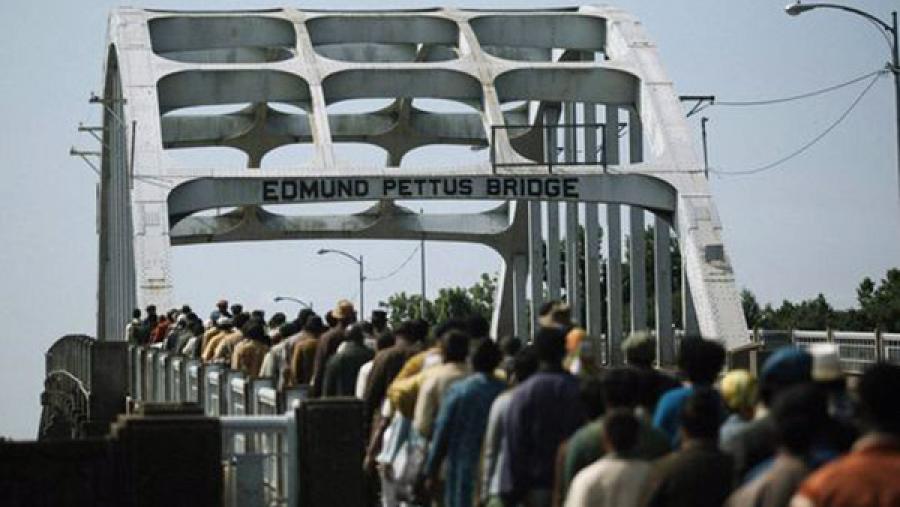 And the right-wing response to the two movements are often indistinguishable.

Besides the similarities between civil rights movements confronting injustice in 1965 and 2015, there are clear parallels in tactics: the protests in both 1965 and 2015 used disruptive public demonstrations to promote necessary political change, and intentionally leveraged emerging media -- TV cameras in 1965, social media in 2015 -- to elevate civil rights issues to a broader audience.

“You look out your window and see people protesting, and then look at ‘Selma,’ and it looks similar,” said Oprah Winfrey, who co-produced the film and plays a woman who became an activist after being denied the right to vote. “When they say, ‘Enough is enough’ and ‘Injustice anywhere is a threat to justice everywhere,’ that’s what King said (in Selma).”

But, the comparisons don't sit well with some of today's right-wing commentators, who insist that modern demonstrators declaring that "Black Lives Matter" in the wake of police killings have little in common with the Selma protesters who sang "We Shall Overcome."

National Review editor-in-chief Rich Lowry, for example, declared that the "real lesson of Selma" is that "today's America is vastly different."

As Businessweek noted, "this is a risky subject for the National Review."

The National Review's founding editor and Lowry's predecessor once-removed, William F. Buckley, certainly didn't consider the Selma protesters to have a "righteous cause" and to be acting with "dignity."

On the right in 1965, there was neither agreement about the righteousness of the Selma cause nor the tactics used to advance it.

Buckley didn't agree with Dr. King's and the Selma protesters' call for expanded voting rights. The National Review founder was sympathetic with what he described as a "well-grounded" fear among Southerners that "if the entire Negro population in the South were suddenly given the vote, and were to use it as a bloc, and pursuant to directives handed down by some of the more demagogic Negro leaders, chaos would ensue."

To be fair, Buckley wasn't calling for the continued disenfranchisement of all African-Americans, just the uneducated; he thought poor whites should be disenfranchised too, by imposing a high school diploma requirement.

Civil Rights Protests Considered Nuisance in Both 1965 and 2014

In many ways, the perspective of the National Review's editors on civil rights demonstrations in 1965 and in 2014 provide powerful evidence of the parallels between the two movements -- or, at least the similarly dismissive attitudes with which both were treated.

"The Left has long posited various means of achieving social justice, from the general strike to consciousness-raising worker collectives. To these methods must now be added traffic congestion, as well as the staging of obnoxious spectacles during the Christmas shopping season."

"How long, to say it very briefly, should sit-ins be allowed to squat down in major traffic zones?"

The first quote was from a December 16, 2014 article penned by National Review's current editor, Lowry, taking aim at protesters that shut down bridges in the wake of the acquittals of the officers who killed Eric Garner.

The second quote was from Buckley, National Review's founding editor, writing in 1965 about Dr. King and the march across Selma's Edmund Pettis Bridge. "It takes a heap of ideology," Buckley added, "to paint [Alabama Governor George] Wallace as the anarchist, and King as the agent of law and order."

Compare Lowry's claims about the "ordinary people" who are "inconvenienced" by demonstrators in 2014 with Buckley's concern about the threat to the "community" posed by protesters in 1965:

"All of these ordinary people, who haven’t harmed anyone, are being inconvenienced for the sin of having somewhere to go," Lowry wrote about Black Lives Matter demonstrations in 2014.

"At what point do the local authorities begin to transfer their concern from the rights of the dissenters to dissent, on over to the right of the community to practice the profession of living?" Buckley wrote about the Selma march in 1965.

But fifty years from now, when today's civil rights demonstrations against long-unaddressed inequities are officially part of history, we may look at Rich Lowry's words about Ferguson through the same lens that we now view William F. Buckley's claims about Selma. What today is regarded as a nuisance could go down in history as a turning point.

Buckley was not alone in opposing the goals of Dr. King and the Selma protesters.

Charles Koch was a member and funder of the John Birch Society in 1965, when it issued a statement denouncing how a "horde of termites from all over the country, led by half-crazed ministers and professors, swarmed over the small town of Selma, Alabama, in a typical demonstration of Communist activism."

In fact, as Center for Media and Democracy Executive Director Lisa Graves has described, the same year that the John Birch Society was denouncing the Selma march as a "sham and a farce," Charles Koch opened a John Birch Society bookstore in Wichita, Kansas stocked with material opposing the civil rights movement.

Koch, a major funder of the John Birch Society whose father was one of its earliest members, remained a member until 1968, when he resigned over the Society's position on the Vietnam War -- yet, as Graves noted, "he made no similar gesture expressing any opposition to its long-standing, high priority anti-civil rights agenda, which his financial support made possible."