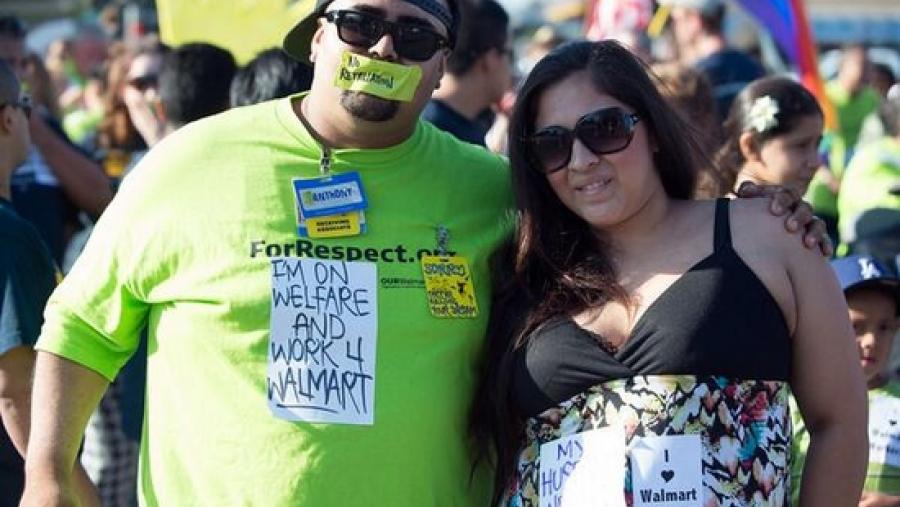 With Black Friday now days away, Walmart workers and their allies are gearing up for what they predict will be the largest strike in the retailer's history.

Among the tens of thousands of people and hundreds of organizations that have vowed to support Walmart's low-wage workers are a growing number of voices from the climate justice movement, calling for broad resistance to the corporation's violations of workers' rights and the environment.

"As people deeply committed to environmental and climate justice, we condemn Walmart as a climate criminal and we stand side-by-side with Walmart’s workers organizing for $15 per hour, full time work, and the respect they deserve," said Brooke Anderson of Movement Generation's Justice and Ecology Project on a press call Friday. "At the same time that Walmart wages war on its workers, it wages war on planet Earth."

Workers with OUR Walmart announced last week that on Black Friday, the day after Thanksgiving, they will stage strikes and work actions at over 1,600 of the retailer's locations across the United States to protest the company's retaliation against employees who organize to improve their conditions. In several cities—from Chicago to Los Angeles to Washington, D.C.—protests are expected to draw large numbers of supporters.

The coordinated actions are part of a growing push for a living wage, steady employment, and the right to organize in the workplace.

Despite the retailer's $16 billion in annual profits and the record-setting wealth of the Walton family, most Walmart workers make less than $25,000 a year, and tens of thousands are being cut off from health insurance benefits. It was revealed this week that a manager at a Midwest City, Oklahoma store has revived one of Walmart's sadder traditions: a food donation drive for workers who can't afford enough to eat. The news prompted widespread criticism, including the creation of a Hunger Games Tumblr highlighting the stories of Walmart associates who are unable to afford weekly groceries.

Worker organizing has galvanized a broad cross-section of movements. A coalition of 226 civil rights, labor, environmental, LGBTQ, and women's rights organizations—representing hundreds of thousands of people across the United States—penned a letter on Friday to Rob Walton, Chairman of Walmart's Board of Directors, demanding the company "commit to giving workers a fair shot."

They called for equal pay and rights for women, LGBTQ communities, and people of color. "Walmart can contribute towards closing the wealth gap by using its position as the largest employer in the country to raise the wages of hundreds of thousands of black and latino workers and correct its history of discrimination by ensuring that all demographics are proportionately represented in management," the letter declares.

Many argue that the environmental movement has direct stake in mounting efforts to take on the retail giant.

"There is shared need for environmental justice organizations and labor unions and workers' organizations to come together on a common agenda," said Timmy Lu, civic engagement manager for the Asian Pacific Environmental Network, which is organizing in solidarity with Walmart workers in Richmond, California for Black Friday. "We see the connection between environmental and economic justice. We have seen the negative impact of Walmart in our communities," Lu told Common Dreams.

An Institute for Local Self-Reliance study released Thursday finds that Walmart burns a "staggering" amount of coal, at 4.2 million tons annually, consuming 0.5 percent of all coal electricity in the United States. Furthermore, a report released by ILSR in October reveals that Walton family members are personally funding almost two dozen organizations that are working to undermine renewable energy policies.

Nonetheless Walmart has sought to cultivate a public image as an environment-friendly company, including by declaring "sustainability goals." This prompted The Green Life in April to designate the company the "worst greenwasher of the year"—a reference to the practice of falsely representing oneself as eco-friendly.

Numerous green groups say they see through the "greenwashing" efforts.

Walmart's track record on climate, and workers' rights, has garnered significant criticism from organizations ranging from the Asian Pacific Environmental Network to Rainforest Action Network to the Sierra Club. When President Obama chose in March to deliver his highly-anticipated energy speech at a northern California Walmart store, he elicited protests from civil rights, environmental, and labor organizations.

According to Anderson, environmental justice groups are prepared to take their concerns to the streets on Black Friday. "In the Bay Area where I live, 17 environmental and climate justice organizations have organized a climate justice-themed protest at the Richmond Walmart," said Anderson. "And we’re not alone. There will be more than 60 protests in Washington State and more than 40 in Minnesota; a light brigade in Quincy, Mass.; Raging Grannies singing in Albuquerque, New Mexico; and workers passing out OUR Walmart cupcakes and coffee to shoppers across the country."

Joe Uehlein from the Labor Network for Sustainability told Common Dreams that environmental groups are "more and more aware of Walmart's carbon footprint and certainly have been reaching out and working with worker rights organizations in the Walmart campaign."

Uehlein added that the case of Walmart shows that environmental and labor struggles are "absolutely" connected. "Throughout history, bad social actors in one arena are generally bad social actors across the board," he said.

I’ve been a union member for the last 30 years and even with a strong union there is retaliation so I can tell you as seasoned representative that the striking Walmart employees have been enduring many forms of retaliation so they will shut up and work. They have my deepest admiration because they are constantly treated in a manner that makes them fearful yet they have the courage to move forward and raise the standard of living for others and themselves. Furthermore employees on any national holiday should be paid double time and a half if they work and regular full time wages for each day not worked including days off. That is called respecting your employees. Companies like Walmart should have to pay a federally mandated tiered minimum wage based off their annual profits. So a company that profits like Walmart could have a minimum wage of $50 an hour and yet others could pay $8. It’s only fare to share that pie at the end of each day because just like Abe Lincoln said” Capitol is much inferior to Labor for it would not exist without it and Labor deserves the highest consideration and not to do so is treason”.