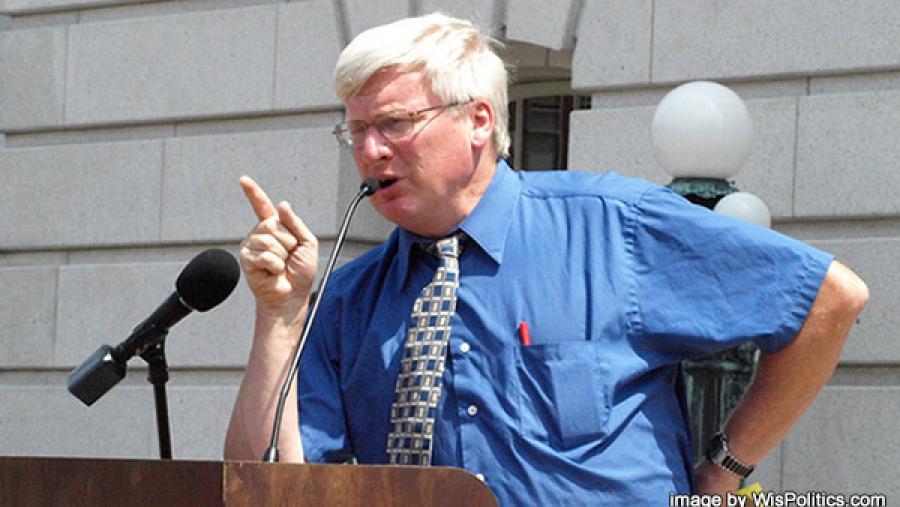 America, meet Glenn Grothman, Wisconsin's newly-elected, weekend-hating Congressman who has a beef with Kwanzaa and his own explanation for the gender pay gap.

According to Grothman, "money is more important for men."

"Glenn Grothman doesn't just drink the crazy right-wing Kool-Aid," said Congressman Mark Pocan in 2011, when he was a state representative. "He is the one making it."

For example, Grothman says that Kwanzaa needs to be "slapped down once and for all," and in a 2013 press release claimed that the founder of Kwanzaa "was a racist and didn't like the idea that Christ died for all of our sins, so he felt blacks should have their own holiday." It is not clear why Grothman felt the need to go on the record about this issue: according to the latest census, just one percent of Grothman's state senate district is African-American.

According to Grothman, everybody is not working for the weekend. He claims the notion of a five-day work week is "a little goofy," saying earlier this year "[it's] a little ridiculous because all sorts of people want to work seven days a week." He has called Planned Parenthood "the most racist organization in the nation" because some of its family planning clinics are located in neighborhoods of color (and pronounces "racist" as "ray-schust.") He said that prohibiting bias against gay and lesbian students would empower teachers who "would like it if more kids became homosexuals."

So how did this guy win?

Grothman is replacing Rep. Tom Petri, a Republican who has represented the 6th Congressional District since 1979. Petri announced his retirement earlier this year after a relentless series of attacks from the right-wing website Media Trackers portrayed the longtime Congressman as an Obama-loving moderate.

Thanks to redistricting, the 6th District is now what Businessweek calls an "impregnable Republican fortress" -- so Petri's replacement would be decided in the Republican primary.

Petri's expected successor was Republican state senator Joe Leibham, a rock-solid Republican who (like Grothman) was an anti-choice, anti-gay member of the American Legislative Exchange Council. Yet Media Trackers apparently decided that Grothman was its chosen candidate.

Media Trackers was launched in Wisconsin in January 2011 as a project of American Majority, the group led by Republican operatives Ned and Drew Ryan, and has since expanded to four other states. The Milwaukee-based Bradley Foundation -- the $500 million foundation led by Scott Walker's campaign chair, Michael Grebe -- earmarked over $563,000 in grants to Media Trackers between 2010 and 2013, and it has also received funding from the Koch-connected Donors Trust.

In its short existence Media Trackers has developed a reputation for mangling the facts, such as hyping flimsy claims of voter fraud during Wisconsin's recall elections, and most notoriously pushing a libelous smear accusing the partner of a Democratic congressional candidate of threatening and attacking a Republican campaign worker.

In the weeks before the 6th District's primary election Media Trackers launched a series of attacks on Leibham, in some cases quoting the Grothman campaign but never reaching out to Leibham himself.

The group's role in the 6th District even led many Wisconsin Republicans to denounce Media Trackers' "underhanded tactics" and "garbage news."

Grothman squeaked through the hard-fought August primary, winning by just 219 votes out of over 46,000 cast. It was the closest Wisconsin congressional race in over four decades.

After that, Grothman's victory was effectively sealed. His Democratic opponent in the general election, Mark Harris, secured the endorsement of the area's newspapers, and didn't hesitate to use Grothman's ridiculous quotes in his ads. But a Democrat was not going to win in the gerrymandered 6th Congressional District in a GOP wave election year.

In which you attempt to refute one of Grothman's statements.
Bwahahaha, you really had me going there.!...oh wait. You're serious?
I live in the 6th district in Wisconsin. I am so sorry that this man has been elected. He is also a huge Bieber fan. The only reason he won is because people in this area are very stupid. They can only decipher between a R or D. Facts are confusing for them. I think it's from the GMO's in the crops that are grown here it's causing brain damage and unfortunately it looks like it is only going to get scarier.
"Wacky"'s not the adjective I'd employ to describe this hateful bastard, anymore than I'd label the state's response to the Ferguson protests as "screwy". Let's call him what he is A stone sociopath.