Governor Snyder Stands Behind Prison Privatization, Even After Maggots and Murder for Hire | PR Watch

Governor Snyder Stands Behind Prison Privatization, Even After Maggots and Murder for Hire 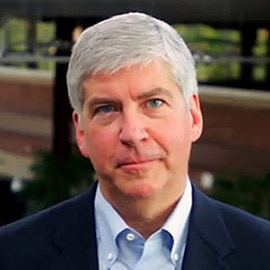 Ideological slogans often trump facts when it comes to the outsourcing of public services. When independent studies are commissioned, the conclusions are often disregarded. In some cases, however, there seems to be solid research supporting the cost-efficiency of privatization. Such was the case in Michigan -- at least at first glance.

In April 2013, Simon Hakim and Erwin Blackstone -- two Temple University professors -- published a paper based on their study, "Cost Analysis of Public and Contractor-Operated Prisons." The results were staggering. Not only would private (or "contractor operated") prisons generate savings of up to 58 percent, but they would also help alleviate overcrowding "without sacrificing the quality of the services."

In their fervor to spread the gospel, the authors also churned out op-eds for Michigan newspapers, such as the Detroit Free Press, calling for prison privatization.

The fact that Michigan was targeted was no coincidence, since the privatization of state prisons has been on the agenda for some years. In 2012, for example, Sen. Jon Bumstead (R) introduced House Bill 5174,78 which would have re-opened the North Lake Correctional Facility -- a youth prison that was previously owned by the private GEO Group, but was forced to close due to high operating costs and widespread abuse of prisoners. The following year, GEO spent $134,200 on lobbying the legislature in hopes of a new contract.

When Bumstead's bill died in the House, the prison privatization proponents regrouped and rolled out a different strategy. If the time was not ready for wholesale outsourcing, perhaps custodial and food services could be privatized?

In May 2013, the Snyder administration announced that Philadelphia-based Aramark Corporation would take over food services in the state prisons. This was a 180-degree turn, as the administration had previously rejected all bids it had received to its RFP, including the Aramark one, on the grounds that none of the proposals would save the state money.

But perhaps the $570,000 Aramark spent on lobbying in the years leading up to the decision, or the research touting prison privatization as a panacea, had something to do with it. In any case, officials with the state Department of Corrections shrugged the earlier decision off as a mistake. Comparisons between private and public sector costs, they said, were not "apples to apples."

Around 370 good paying state jobs were at risk, the newspapers reported, when Aramark took over food services. Job loss was not the only risk. In 2009, the poor quality food and the meager portion sizes Aramark served at the Northpoint Training Center in Burgin, Kentucky, caused a riot. "It's over the food," a corrections officer told the committee investigating the incident. "The food was slop."

With the CEO of Aramark, Eric J. Foss, making $18 million a year, there have to be savings somewhere.

The warning signs from Aramark's track record were there, but the Snyder administration paid little attention. Aramark took over food services in December 2013.

After seven months, the company has amassed an impressive rap sheet: In June 2014, 30 prisoners came down with severe food poisoning as maggots and larvae were discovered in the food. 74 workers were banned for offenses ranging from having sex with inmates to smuggling contraband.

The state fined Aramark $98,000 in March for food shortages, "unauthorized menu substitutions," and sexual relations between kitchen workers and inmates, and another $200,000 in August after problems persisted.

All the while, the Snyder administration has stood behind the company and the state prison director quietly waived the $98,000 fine soon after it was imposed. Perhaps Snyder will reconsider this position given shocking new allegations that an Aramark worker has asked a prisoner to assist him with a murder-for-hire plot.

"Obviously it hasn't gone as smoothly as we want ... I trust that it's going to get better," said Rep. Joe Haveman (R). After all, independent research supports the idea that prison privatization will lead to significant savings, at least in the long run, right?

Not so fast. Doubting the rosy figures in Hakim and Blackstone's report, Alex Friedmann, an ex-inmate turned activist, demanded to know where the funding came from. It turned out that they had received a grant from "the private corrections industry." "It's kind of like the tobacco industry funding the Tobacco Institute, which says smoking is just fine for you," Friedmann said.

In fact, Corrections Corporation of America and the GEO Group -- two for-profit corporations motivated to advance prison privatization in the state and across the country -- funded the research. It seems that the 2013 Michigan campaign took a two-pronged approach: By encouraging respected academics to write op-eds, and spending $134,000 on lobbying in the state, GEO hoped to get a new slice of the market.

It is unlikely that we will see more Michigan prisons in private hands soon, but the lobbying has worked wonders. Officials and lawmakers, educated by $570,000 from Aramark, turned a blind eye to the company's abysmal track record. They even discounted the company's own savings projections of less than 10 percent -- not as being exaggerated, but as being too conservative. Instead, they argued that the state would save 20 percent or about $16 million, with little evidence to back up their claims.

When asked just days ago why he hasn't fired mega-firm Aramark, Snyder replied "I prefer to work with people first."

This is an excerpt from CMD's new report Pay to Prey: Governors Facilitate the Predatory Outsourcing of America's Public Services. Learn more at OutsourcingAmericaExposed.org, #OutsourcingAmercia.