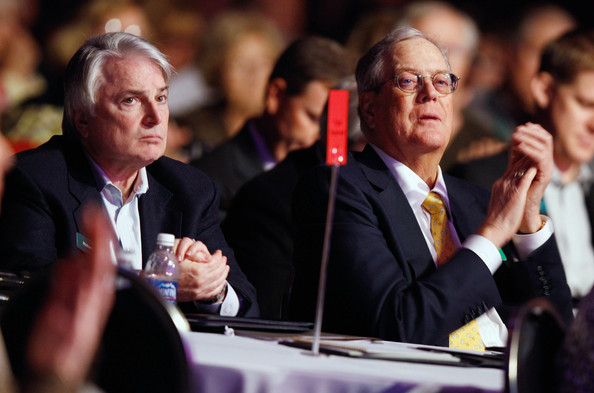 "So the big danger of minimum wage isn’t the fact that some people are being paid more than their valued-added," Fink told the gathering of donors and GOP operatives in Dana Point, California this summer, according to a recording obtained by The Undercurrent. Instead, he claimed, 500,000 people would lose their jobs, "putting them unemployed, making dependence part of government programs, destroying their opportunity for earned success. And so we see this is a very big part of recruitment in Germany in the 20s."

And if you look at the Third — the rise and fall of the Third Reich, you can see that — they’re fighting, the (inaudible) they don’t know what to do, whatever. And what happens is a fascist comes in and offers them an opportunity, finds the victim — Jews or the West — and offers them meaning for their life, okay? The nation, Germany, the superior race.

(Inaudible) and professors and people who do the most horrific things, and this is not just in Germany. It’s in Russia, in Lenin, and Stalin Russia, and then Mao. This is the — this is the recruitment ground for fascism, and it’s not just historical. It’s what goes on today in the — in the suicide bomber recruitment.

Fink does not explain why the loss of 8 million jobs after the Wall Street financial crisis failed to lead to a nazi takeover. He doesn't mention that 750,000 public sector jobs have been cut since 2010, thanks to austerity budgets pushed by Koch-backed governors like Scott Walker of Wisconsin. Yet few unemployed teachers have been seen marching in jackboots.

Before Fink spoke, he was introduced as the Kochs' "grand strategist."

The Weekly Standard has described Fink as "a fixture in Koch Industries, coordinating business ventures, philanthropy, and activism and becoming Charles Koch’s intellectual sounding board."

Fink is on the board of Koch Industries Inc. and its DC lobby shop Koch Companies Public Sector LLC, as well as Koch subsidiaries Georgia Pacific Equity Holdings, LLC and Flint Hills Resources, LLC. He is also a board member of Koch political groups like Americans for Prosperity and the Institute for Humane Studies. Fink also sits on the board of the three Koch family foundations. With Koch funding, Fink helped launch the Mercatus Center at George Mason University, and remains on its board.

Read the full speech at The Undercurrent.