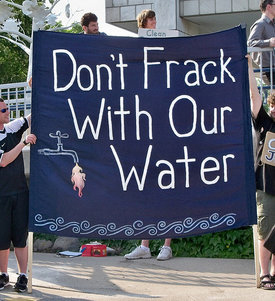 As a historic drought grips the U.S. southwest, towns in Texas and California are taking action to make sure precious fresh water is not wasted and spoiled through fracking.

At the same time, some investment advisors are urging right-wingers at the annual libertarian "Freedom Fest" to view drought and skyrocketing water prices as a major investment opportunity.

Hydraulic fracturing, commonly called "fracking," is a procedure for extracting oil by injecting a mixture of fresh water and chemicals into the earth at high pressure to fracture rock formations deep underground.

A record 14-year drought, combined with population growth and increasing industrial and agricultural water use, has drained the Colorado River basin, which feeds water to Colorado, Nevada, Utah, Arizona, California, New Mexico, and Wyoming. Amid the drought, water use by the fracking industry is prompting criticism by farmers and other local residents as well as national environmental organizations.

Over ninety five percent of fracked wells in Colorado and California are in areas with high or extremely high water stress, according to a report by Ceres, a nonprofit that advises businesses on environmental issues. The Ceres report calls Texas "ground zero for sourcing risks," as fracking-related water use is expected to double over the next ten years, although more than two-thirds of the state is expected to remain in drought.

Activists Fight Back with Fracking Bans at the Local Level

Grassroots activists in the town of Denton, Texas want it to become the first city in Texas to ban fracking--even though it has taken in over $30 million in revenue from natural gas extraction over the past decade.

Officials in Denton, Texas temporarily halted fracking after the Denton Drilling Awareness Group and other local activists collected signatures from almost 2,000 registered voters in support of a ban, more than three times the number required to force the city council to consider a resolution.

Texas nurse and activist Cathy McMullen told the Associated Press that drillers' defiance of common-sense city rules requiring them to line wastewater pits and prohibiting them from burning off waste gas in residential areas spurred local opposition. "All that did was make people so fired up," she said. University of North Texas professor Adam Briggle, who helped McMullen organize the Denton Drilling Awareness Group, got involved after he learned the Denton city council's advisory panel on fracking was dominated by industry interests. "The official task force they formed to advise the City Council had three of five members from industry groups," Briggle told the press.

On Tuesday night, an estimated 500 people came to watch the city council vote on a ban, filling the hall and satellite rooms. The hearing lasted into the early hours of Wednesday morning, with over 100 people registered to give testimony. While the measure failed in a 5-2 vote, voters will have their say on a ballot referendum in November.

In California, activists are also working county by county to place fracking bans on local ballots for the November election. The strategy bypasses the state legislature, where efforts to pass a state-level moratorium on fracking have repeatedly stalled. Organizers have already succeeded in placing fracking bans on the November ballots in San Benito County and Santa Barbara County. They follow in the footsteps of cities like Longmont, Colorado, which became the first city to ban fracking in Colorado in November 2012.

Rebecca Claassen, a volunteer with the Santa Barbara County Water Guardians, told Northern California's KQED that environmental and economic concerns were driving support for the ban. “We have a lot of agriculture and tourism that both depend on clean water,” Claassen says, “and so the risks of water contamination really resonated with most everyone.”

Just this past month, New York courts approved the right of towns in that state to ban fracking, over the objections of fracking corporations and rightwing groups that have backed industry interests.

“Hurricanes, Tornados and Earthquakes: Volatility as an Asset Class”

While activists push to protect precious water resources during the extended drought, others are looking to profit from the crisis.

Participants in this month's Freedom Fest in Las Vegas, an annual libertarian conference, were advised to capitalize on water shortages due to fracking by David Norcom of NorCap Advisors, a Dallas-based investment management firm specializing in energy-related stocks.

"Now, let's have fun," Norcom told the audience near the end of his presentation, which was titled “Hurricanes, Tornados and Earthquakes: Volatility as an Asset Class.”

"This is the curve ball I wanted to throw at you. How many millions of gallons of water do you think it takes to frack one well?"

Norcom said that the total amount of clean water that could be spent on a single fracking well over its use is 10 million gallons, Norcom told the audience, "Those of you in California know how bad it's getting there, but you need to have a portfolio of water stocks in your account. If you had bought water stocks at the beginning of this year, they're up without dividends between fifteen and thirty percent."

The cost of water to Americans across the Southwest has risen dramatically since 2000, increasing more than sixty percent in cities like Phoenix, El Paso, and Los Angeles, and over one hundred percent in San Diego, Santa Cruz, and Las Vegas, according to a report by USA Today.

Some see this crisis in one of the essential needs for human life as an opportunity for profit.

"I will substantially argue to you that the water resource problem that we have in this country is very, very likely to continue, part of it being sucked up by the drillers over here," Norcom said.

From his perspective, that means water will have "a great place in a portfolio" of investments.

Whatever value fracking may have for speculators, its costs to those living near drill sites are serious. Fracking has been implicated in the record seven earthquakes that hit Oklahoma in just two days over the past weekend. According to the U.S. Geological Survey, which is investigating possible links between fracking and the quakes, Oklahoma's rate of earthquakes has increased by fifty percent since October 2013.

Perhaps seismometers will be the next "asset class."

Learn more about fracking at FrackSwarm.org.