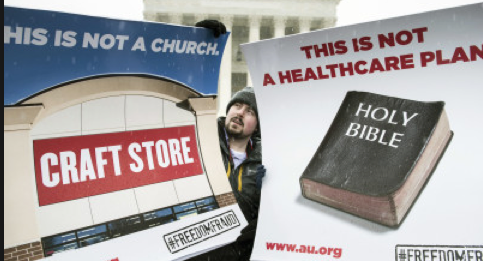 The conservative majority on the Supreme Court once again expanded its doctrine of corporate personhood with its ruling on Monday in the Hobby Lobby case.

“Protecting the free-exercise rights of corporations like Hobby Lobby, Conestoga, and Mardel protects the religious liberty of the humans who own and control those companies.”

And while the Court limited its decision to tightly held private companies, its argument applies to all corporations.

Justice Ruth Bader Ginsburg jumped all over this in her dissent.

“Although the Court attempts to cabin its language to closely held corporations, its logic extends to corporations of any size, public or private,” she noted.

“There is in the case law no support for the notion that free exercise rights pertain to for-profit corporations,” she wrote. “Until this litigation, no decision of this Court recognized a for-profit corporation’s qualification for a religious exemption from a generally applicable law…. The absence of such precedent is just what one would expect, for the exercise of religion is characteristic of natural persons, not artificial entities.”

She added that “the Court’s expansive notion of corporate personhood…invites for-profit entities to seek religion-based exemptions from regulations they deem offensive to their faith.”
She noted that employers could claim “religiously grounded objections to blood transfusions (Jehovah’s Witnesses); antidepressants (Scientologists): medications derived from pigs, including anesthesia, intravenous fluids, and pills coated with gelatin (certain Muslims, Jews, and Hindus); and vaccinations (Christian Scientists, among others).”

She concluded, pithily: “The court, I fear, has ventured into a minefield.”

She also argued that the majority on the Court minimized the compelling state interest in “public health and women’s well-being.”