Amend the Constitution to Restore People’s Voices in Our Democracy 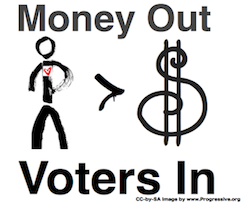 On June 3rd, 2014, the Senate Judiciary Committee will hold a hearing on a constitutional response to the crisis of money-in-politics that has developed as a result of the U.S. Supreme Court’s recent line of campaign finance decisions, such as McCutcheon v. FEC and Citizens United v. FEC. Over two million signatures will be delivered to the Committee, demanding that Congress take action to amend the Constitution to get money out of politics.

“Our democracy is increasingly for sale,” said Lisa Graves, the President of the Progressive Inc/Center for Media and Democracy (who was previously Chief Counsel for Nominations for the Senate Judiciary Committee). She added, “this crisis is caused by illegitimate rulings by five biased members of the U.S. Supreme Court who have torn apart decades of election laws in order to expand the power of rich for-profit and non-profit corporations and individuals under the guise that our First Amendment commands this result. It does not.”

Groups like Wisconsin Club for Growth have aggressively attacked Wisconsin’s laws, asserting that the First Amendment prohibits state authorities from enforcing campaign finance laws barring coordination between candidates and “independent” groups. As CMD has documented, a right-wing judge who has attended Koch-funded junkets has even celebrated Club for Growth’s “circumvention” of the law and ordered evidence destroyed. The document destruction order was summarily reversed by the Seventh Circuit.

The U.S. Senate Judiciary Committee will examine the data about America’s elections since the Citizens United ruling in 2010. It will also discuss Senator Tom Udall’s amendment proposal, SJ RES 19, which he contends would restore Congress’ constitutional authority to regulate the raising and spending of money to influence elections. The amendment currently has 41 sponsors in the Senate.

CMD will join other organizations -- including People for the American Way, Free Speech Is for People, Public Citizen, and Common Cause -- to deliver more than two million petitions to the Senate Judiciary Committee in support of amending the Constitution.

"Amend the Constitution to Restore People’s Voices in Our Democracy" Do we still have one? Or just going through the motions?