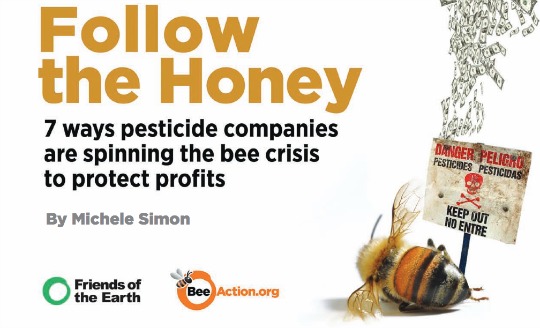 One out of every three bites of food we eat requires pollination by bees, but America's bee population is taking a pounding, with initial reports indicating greater losses of hives this winter than the last.

Many scientists believe that neonicotinoid (neonic) insecticides could be playing a role in the bee die-off. Rather than taking action on problem that threatens food production worldwide, pesticide companies have taken a leaf from the tobacco industry playbook, ramping up efforts to sow doubt about the extent of the problem and their own potential role in the crisis, says a new report by the non-profit environmental organization Friends of the Earth and Michele Simon, author of Appetite for Profit.

The report, "Follow the Honey: 7 Ways Pesticide Companies are Spinning the Bee Crisis to Protect Profits," compares the public relations strategies of multinational pesticide companies Bayer, Syngenta, and Monsanto (and their trade associations and front groups) to those of the tobacco industry in delaying policy action on smoking. According to the report:

"Bayer, Syngenta and Monsanto are using a 'kitchen sink' approach to divert attention from the problem of neonic pesticides while creating an elaborate appearnace of being 'out in front' and taking a lead role in 'saving bees.' Accompanying these tactics are relentless lobbying and new litigation based on similar messages of diversion and denial. Their goals: manufacture doubt about their products' contribution to the bee crisis and delay action, or defeat bans or limits on neonic pesticides, in order to allow them to continue profiting from these products as long as possible." 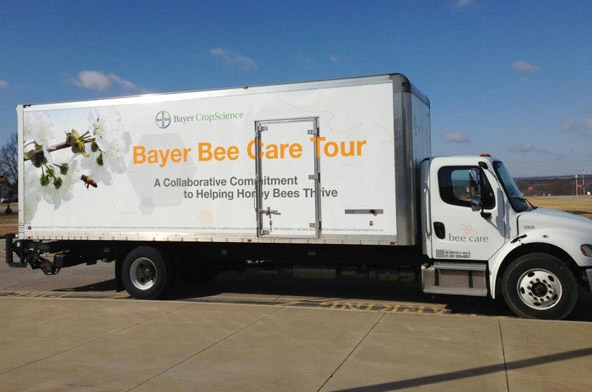 Part of the pesticide industry PR strategy, according to the report, is creating the appearance of being "out in front" of the bee crisis and leading the charge to "save the bees." One example is Bayer's "Bee Care Tour," which launched last year and continues this year with stops at universities on the west coast as well as Indiana and South Dakota. Its star appearance will be in Washington, DC in June for National Pollinator Week. The tour comes complete with a truck wrapped with corporate logos and pretty pictures of bees and flowers.

Of the three pesticide companies in the neonic market, Bayer may stand to lose the most if limits are placed on their use. Its two neonic products, imidacloprid and clothianidin, are worth more than $1.5 billion. It make sense that Bayer be worried, but how does the firm manifest its concern? 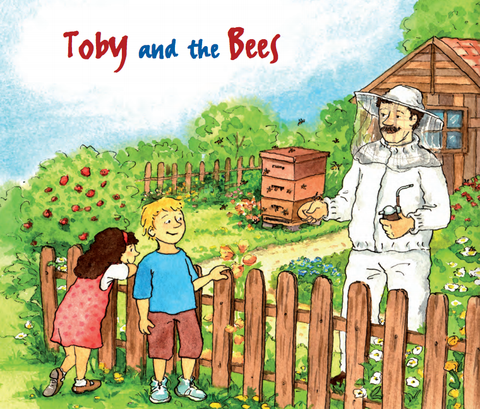 According to the report, Bayer publishes a children's book called Toby and the Bees, "in which a friendly neighborhood beekeeper tells young Toby that the bees are getting sick, but 'not to worry' it's just a problem with mites, and there is special medicine to make bees healthy. Bayer manufactures that 'medicine' -- miticide Check-Mite Plus (coumaphos) . . . The book fails to mention the role of pesticides in bee declines and the role that neonicotinoids play in making bees more vulnerable to mites and pathogens."

Bayer even distributes plush bees with tags saying, "We care for bees."

Syngenta also has a share in the neonic market. Its product, thiamethoxam, is worth $627 million. In an attempt to deemphasize the possible role of pesticides in bee declines, the company's PR materials go so far as to blame the problem in part on human fear. A "Plight of the Bees" page on its website explains, "Many people are afraid of bees, wasps, hornets, and many other flying insects. This fear converts, unfortunately, into a major health threat to bees, as too many people simply kill them if they fly into a home or too near to people as they eat, sleep, talk or drink. The number of bees killed by humans each year dwarfs the number of bees killed by any of its other predators."

Syngenta has also produced stanged interviews masquerading as news distributed via YouTube and its website, in which company officials deny and spin the science. The report cites one video in which chief operating officer John Atkins "assures a seemingly sincere actor-journalist, that 'we are completely convinced … that bee declines have nothing to do with this class of chemistry [neonics]' and 'millions of hectares have been tested to verify that these products are safe to bee populations … [T]he combination of their benefits and the lack of impact on the bee populations is why they are so important worldwide.'"

While Monsanto does not directly manufacture any neonicotinoids, it does sell seeds pre-treated with the insecticides. In the United States, about 90 percent of corn, for example, is treated with neonicotinoids, according to Mother Jones. Monsanto's overall sales of "Seeds and Genomics" were $9.8 billion in 2012.

Monsanto announced the formation of a Honey Bee Advisory Council consisting of Monsanto executives as well as scientists and beekeepers from around the country in June 2013. The FOE report suggests that Monsanto "may be using the council's scientific credibility to emphasize bee threats other than pesticides" because a company press release says that, "based largely on HBAC's counsel, it has focused its bee health research efforts on finding a way to control the varroa mite . . ."

Monsanto bought Beeologics, a $113 million bee research firm, in what the FOE report describes as a "fox-buys-henhouse" situation in September 2011. Beelogics had developed an antiviral product that it indicated has the potential to ease the bee crisis. Simon writes that the acquisition and attendant PR effort "has presented the company as a conscientious and effective leader in addressing the bee crisis."

"Be Aware of the Tobacco-Style Tactics Pesticide Companies Are Using"

In an appeal to reporters and the media, the "Follow the Honey" report urges awareness of these tobacco-style tactics being used to "deflect blame from pesticides." And it asks how long the public will allow these tactics to "delay meaningful action in protecting these small but essential pollinators."

Europe has implemented a continent-wide two-year suspension on the use of the three most-used neonicotinoids -- imidacloprid, clothianidin and thiamethoxam. Meanwhile, the U.S. Environmental Protection Agency (EPA) and U.S. Department of Agriculture (USDA) issued a joint report in May 2013 concluding in part that "pesticide exposure to pollinators continues to be an area of research and concern, particularly the systemic pesticides such as neonicotinoids." But although the EPA is currently required to review the use of neonicotinoids as pesticides, the review is not scheduled to be completed until at least 2018. And the EPA and USDA have stated that a U.S. neonicotinoid ban is unnecessary.

FOE asks supporters to call on the EPA and Congress to act now to restrict neonicotinoids.

Chemtrails--aerosol sprays are nano sized--go straight to our brains and cause Alzheimers, dementia. Do you really think the bees forgetting where their homes are is not the same thing, but on a much more rapid scale? Pesticides are horrible to bees and other living things, but nothing compared to democide, genocide, mass murder, mass extinction due to chemtrails.
“And the EPA and USDA have stated that a U.S. neonicotinoid ban is unnecessary”. You know these neurotoxins are the cause of bee declines WTF do you mean a ban is unnecessary?
If Bayer was able to prove that their Neonicotinoids were not responsible for all the honeybee devastation this BS Bayer bee care program wouldn’t even exist, guaranteed.