A Portrait of Time Warner's Active Role in ALEC

As a merger between Time Warner and Comcast moves forward, the Center for Media and Democracy is republishing an excerpt from an investigative report on PRWatch.org by DBA Press founder Beau Hodai detailing how Time Warner helped bankroll major American Legislative Exchange Council (ALEC) events, and funded the schmoozing and boozing of lawmakers at ALEC meetings. Both Time Warner and Comcast have been longtime members and funders of ALEC.

Records obtained in 2011 from the office of Ohio Rep. John Adams, the ALEC public sector chair for the state, show how he worked closely with ALEC's Ohio private sector chair, Time Warner Cable lobbyist Ed Kozelek, to raise funds for the national ALEC meeting held in Cincinnati in April 2011. 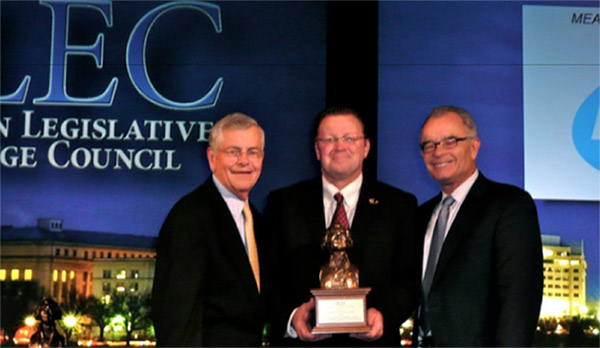 According to these records, Adams and Kozelek received pledges from more than 50 corporations and lobby firms, totaling $107,500 to ALEC operations in Ohio, by the end of February 2011....

A number of lobbyists, aside from Kozelek and Time Warner Cable Midwest Region Director of Government Relations Megan Lashutka, lent their services to this fundraising drive. Most notably, the ALEC fundraising crew was joined by high-powered Ohio lobbyist, Charles "Chip" Gerhardt, III. Gerhardt is the founder and president of Government Strategies Group, LLC (GSG). GSG itself, though Gerhardt, contributed $1,000 to ALEC Ohio in February 2011.

While Gerhardt lobbied on behalf of a large number of clients in 2011, it is worth noting that he represented prospective ALEC Ohio donors Rock Gaming and Great American Insurance/American Financial Group. Gerhardt is also a longtime lobbyist for Duke Energy Business Services (Duke) and was employed by Duke during this time.

According to records obtained from the office of Rep. Adams, Duke and Time Warner Cable were the two largest single contributors to ALEC operations in Ohio through the at least the first half of 2011 -- both corporations delivering at least $20,000 each in tax-deductible corporate cash to the Ohio ALEC "scholarship fund" by June of that year....

During the August 2011, ALEC Annual Meeting in New Orleans, [Adams' Senior Legislative Aide Kara] Joseph -- who [was] reimbursed for her travel to such meetings from ALEC -- received the ALEC "Volunteer of the Year Award."

Records obtained from the office of Rep. Adams leave little room to doubt that Joseph earned this award.

Not only had Joseph been instrumental in raising funds, recruiting volunteers and acting as an all-around go-to for all things ALEC in the run up to the 2011 Cincinnati STFS, but Joseph also carefully coordinated with ALEC donor lobbyists in the creation of detailed itineraries for ALEC member lawmakers attending the 2011 New Orleans and Scottsdale events.

An example of one such itinerary reads as follows:

According to records obtained from the office of Rep. Adams, Joseph had some help in putting these itineraries together. Determinations on where lawmakers would dine and with whom were made at the request of ALEC Ohio donors. Essentially, a lobbyist would deliver a check to the office of Rep. Adams or to Kozelek, ranging in size from $500 to $5,000 (these amounts based on records relating to the New Orleans event) for the Ohio "scholarship fund," or for the delegation's "Ohio Night." Then the lobbyist would approach Joseph with his or her dinner guest request.

For example, on October 19, in the run up to the Scottsdale ALEC States and Nation Policy Summit (SNPS), lobbyist Gary Koch wrote an email to Joseph requesting the names of Ohio lawmakers who would be attending the event. Joseph dutifully provided Koch with the list. Koch responded that he wanted help putting a dinner event together for the benefit of five specific lawmakers. At the time of this request, Koch represented such corporate interests as Eli Lilly, AT&T, and the Wholesale Beer and Wine Association of Ohio.

Although records obtained from the office of Rep. Adams do not contain a complete accounting of private sector contributions to ALEC Ohio funds as they relate to the Scottsdale SNPS, available records do indicate that Koch had given $5,000 on July 5, 2011, for use during the ALEC "Ohio Night" event in New Orleans. These records list Koch as being a "platinum"-level sponsor and indicate that the contribution had been made on behalf of Eli Lilly.

Similarly, emails show that Time Warner Cable lobbyist Megan Lashutka coordinated the planning of these dinners with Joseph -- with Time Warner Cable reserving "first dibs" on lawmakers attending the summit. As previously discussed, Time Warner Cable had contributed at least $20,000 to the Ohio ALEC "scholarship fund" through the first half of 2011 alone -- coupled with an additional $1,000 contribution on July 21 for use during the "Ohio Night" event in New Orleans.

Records indicate that Koch, Lashutka, and other lobbyists were accommodated in their requests: itineraries drafted by Joseph for lawmakers attending SNPS show these legislators (along with Joseph and her husband) being whisked around to bars and dining venues throughout Scottsdale for private soirees with Time Warner Cable, Koch, lobbyists with the firm of Sean Dunn & Associates, LLP (representing such ALEC Ohio donors as AT&T and the Ohio Hospital Association), and others.

Given all this, it is easy to lose sight of the fact that Joseph is a public employee, paid nearly $47,000 annually by Ohio taxpayers to serve as a senior legislative aide to Rep. Adams. Yet, Joseph seems confused at times as to who her actual employers are. Nevertheless, records obtained from the office of Rep. Adams show that Joseph does not feel it is she who is confused.

On May 2, 2011, Joseph received an email from AT&T lobbyist Paul Weirtz. The email contained a link to a post on 'progressive' blog, "Daily Kos" ("Breaking!! First ever demonstration against an ALEC event in Cincinnati," posted by "OhioDem1," April 29, 2011). The blog post discussed protests held during the Cincinnati ALEC event and mentioned plans for a second protest at the upcoming New Orleans meeting.

"You probably saw this article," wrote Weirtz. "Note that they are planning protests in New Orleans. Like we will be able to tell the difference between them and the Bourbon Street revelers."

Joseph immediately forwarded the email on to Kozelek and ALEC Director of State Programs Laura Elliott.

"Thanks for sending this to us! We really appreciated it," wrote Elliott.

"No problem. They're so confused."

Part 2: Lessons from a Baseball Game

"Please join us for a great American pastime!" 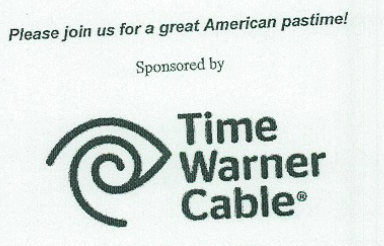 The Hilton Netherland Plaza Hotel served as the site for the 2011 ALEC State Task Force Summit (STFS) in Cincinnati. The summit featured the standard ALEC fare for the more than 500 attending member lawmakers: gourmet dining events, nights out on the town for state delegations, a reception for ALEC board members, and task force luncheons.

And, as is also common at many ALEC events, a recreational event -- having nothing to do with legislative education -- was held for member lawmakers, their families and the attendant throngs of lobbyists.

The special recreational event for the 2011 Cincinnati STFS took place on the evening of April 29 in the form of a shindig at the Great American Ballpark, home to the Cincinnati Reds.

The invitation for the event read:

One vital detail to note here (just in case the invitation doesn't make this clear) is that event was sponsored by Time Warner Cable.

While lawmakers from other states attended this game, records obtained from the office of Rep. Adams indicate that this Ohio delegation likely comprised close to half of the total ALEC public sector presence at this event.

An examination of statements of financial disclosure filed by the more than 60 Ohio ALEC member lawmakers for 2011 yields no trace of any of these gifts -- no indication that in 2011, 30 Ohio legislators and legislative aides received a combined total of $33,791.64 in "scholarship fund" disbursements for expenses related to the Cincinnati STFS and the New Orleans the Annual Meeting; no indication that the 21 members of the Ohio legislative delegation to the New Orleans ALEC Annual Meeting were the beneficiaries of $64,000 raised from 36 donor lobbyists (representing such notable corporations as British Petroleum, Cash America, Pfizer, AT&T, Time Warner Cable, and Novartis Pharmaceuticals Corporation) to be spent on the legislators' night out in the Big Easy....

Similarly, lobby reports filed by Time Warner Cable -- which had, by the time of the Cincinnati event, contributed at least $20,000 to the ALEC Ohio "scholarship fund" for 2011 -- purport that the corporation had only expended $77.16 while lobbying Ohio lawmakers during the first quarter of the year.

Inoculated from public disclosure with the public's cash

How is this possible? How could tens, if not hundreds of thousands of dollars in gifts and lobbying expenditures for the benefit of Ohio lawmakers have completely disappeared from public sight?

The answer is a pretty straightforward one: Ohio law contains numerous disclosure exemptions for items of worth (be they cash, meals, or plane tickets) received by lawmakers in conjunction with events held by certain legislative membership organizations. According to Ohio law, a lawmaker (or, transversely, a lobbyist) does not need to disclose expenses relating to travel, lodging, or meals received/incurred (or given/expended, in the case of lobbyists) at "a meeting or convention of a national or state organization to which any state agency, including, but not limited to, any legislative agency or state institution of higher education ... , pays membership dues."

As previously discussed, the Ohio General Assembly pays $1,000 annually in membership dues to ALEC (even though not all members of the General Assembly are ALEC members). Without this one very small drop of Ohio state public funding in the more than $7 million bucket that is ALEC, Ohio lawmakers would not be able to accept these gifts free and clear of public disclosure.

These ALEC General Assembly membership dues are paid each year through the Ohio Legislative Service Commission (LSC). Interestingly enough, in January of 2012, at the time when LSC re-upped Ohio ALEC membership dues for calendar year 2012, and paid dues owed for calendar year 2011, the chairman of the commission was Speaker Batchelder. Batchelder, according to documents obtained from the office of Rep. Adams, had received $884 in "scholarship fund" disbursements for his attendance at the 2011 New Orleans meeting. And, of the 14 LSC members -- including LSC vice chair Sen. Tom Niehaus -- at least 10 are known ALEC members.

Read the rest of this story here.

For more on how Time Warner and Comcast have pushed their agenda through ALEC, read "How ALEC Helps Big Telecom Change State Laws for Corporate Gain." Also, notably, in 2013, another staffer of Rep. Adams was given ALEC's "volunteer" of the year award; you can watch Lauren Windsor's interview of Rep. Adams about the ALEC awards he and his staffer received, and more here.