New details have emerged about the role of the shadowy "Citizens for a Strong America" in Wisconsin politics. 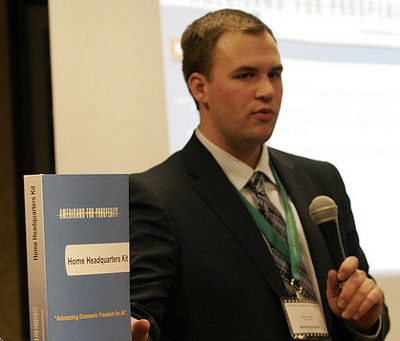 Last August, the Center for Media and Democracy uncovered that Citizens for a Strong America in 2011 gave $235,000 to United Sportsmen of Wisconsin, a group with close Republican ties that won and then lost a $500,000 taxpayer grant to promote hunting in the state, despite little experience with such activities. The Milwaukee Journal Sentinel reports today that this $235,000 donation was United Sportsmen's entire budget in 2011.

Separately, on Friday it was reported for the first time that Citizens for a Strong America had been involved in the John Doe probe into potential campaign finance violations during the recall elections.

The Wall Street Journal editorial board wrote on Friday that subpoenas issued to Citizens for a Strong America, Friends of Scott Walker, Wisconsin Manufacturers & Commerce Inc., and the Wisconsin Club for Growth were quashed by retired Appeals Judge Gregory A. Peterson, because they "do not show probable cause that the moving parties committed any violations of the campaign finance laws."

This was the first time Citizens for a Strong America has been named as involved in the probe.

Since 2011, CMD has reported extensively on the activities of this group in the state, and revealed exclusively that the president of Citizens for a Strong America, John Connors, is "Director of Special Projects" for the Franklin Center for Government & Public Integrity/Wisconsin Reporter.

This helps explain the Franklin Center's eighteen-part series attacking the John Doe as well as some of its unique insights into the case. The Franklin Center has failed to disclose Connors' connection to the issue and fails to regularly note that the Franklin Center's founder Eric O'Keefe (Director of Wisconsin Club for Growth) was subpoenaed in the investigation. On January 10, when Franklin Center / Wisconsin Reporter wrote about the quashed subpoenas for Citizens for a Strong America and other organizations, it did not mention its close ties to the group.

Below we recap some of these previous reports.

From the article Why Are the Franklin Center's "Wisconsin Reporter" and "Watchdog.org" Attacking the John Doe?

Read more: Why Are the Franklin Center's "Wisconsin Reporter" and "Watchdog.org" Attacking the John Doe?