The Center for Media and Democracy (CMD) is publishing this excerpt from our new report, "EXPOSED: The State Policy Network -- The Powerful Right-Wing Network Helping to Hijack State Politics and Government," along with excerpts from Jane Mayer's New Yorker article, as part of our efforts to expose SPN and its affiliates in states across the country. Please see StinkTanks.org for more. 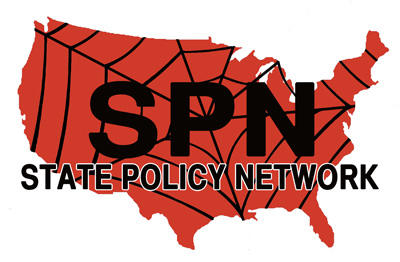 Who is Tracie Sharp? She is the executive director of the State Policy Network (SPN), a web of right-wing "think tanks" in every state across the country. Although many of SPN's member organizations claim to be nonpartisan and independent, our in-depth investigation reveals that SPN and its member think tanks are major drivers of the right-wing, America Legislation Exchange Council (ALEC)-backed agenda in state houses nationwide. They have deep ties to the Koch brothers and the national right-wing network of funders, and several affiliates appear to orchestrate extensive lobbying and political operations to peddle their legislative agenda to state legislators while reporting little or no lobbying activities.

During Sharp's tenure, SPN has grown at a rapid rate, expanding from 43 member state think tanks in 2002 to 64 member state think tanks as of 2013. Sharp personally co-founded the Cascade Policy Institute, SPN's franchise-like operation in Oregon. (While she was at Cascade, Philip Morris state lobbyists worked hand-in-hand with CPI to oppose tobacco taxes.)

The network has become a multi-million dollar empire: In 2011, the combined revenue of SPN and its member think tanks totaled $83.2 million. It has also quietly become one of the most prominent members of the national right-wing network and an essential tool for some of the richest CEOs in the world to push their right-wing agenda. In addition to its 64 member think tanks, SPN also has over 100 "associate members."

SPN gave its affiliate the Texas Public Policy Foundation $49,306.90 in 2010, according to TPPF (SPN's own tax filings claim that it only gave TPPF $19,500 in 2010), but what may be more interesting is that Tracie Sharp, SPN's president, was the contact person for an additional $495,000. These two grants, for $300,000 and $195,000, were listed as being received from the "State Think Tank Fund" and the "Government Transparency Fund," respectively -- two funds about which virtually nothing is known (one recipient of money from the "State Think Tank Fund" told CMD that the fund "was available to members of the State Policy Network. There was, as I remember, a big donor to SPN who had made the money available to SPN to fund a variety of projects").

In other words, SPN's leader apparently has at her disposal two funds of such significant value that she can readily use them to dispense nearly one-half of a million dollars to one think tank in Texas in one single year. It is not known how much Sharp dispensed, if anything, to other SPN think tanks or operations that year or over many years. Nor is it known who or what is the source of such money that she controls but that is apparently not controlled by SPN itself. And it is not known what these untold sums have purchased or been used to accomplish.

To Press, Sharp Calls SPN Affiliates "Fiercely Independent," but Behind Closed Doors, She Says They Operate on "IKEA Model" 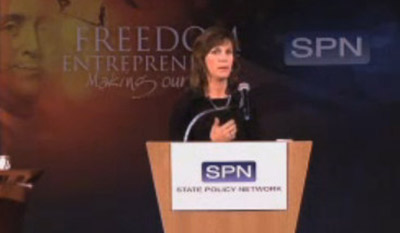 In response to CMD's report, "EXPOSED: The State Policy Network -- The Powerful Right-Wing Network Helping to Hijack State Politics and Government," which we released last week, Sharp issued a prepared statement to statehouse and national reporters, claiming that "each of the 64 state-based think tanks is fiercely independent, choosing to manage their staff, pick their own research topics and educate the public on those issues they deem most appropriate for their state."

Two days after the report's release, however, The New Yorker's Jane Mayer caught Sharp in a contradiction. In her article, "Is IKEA the New Model for the Conservative Movement?," the Pulitzer-nominated reporter revealed that, in a recent 800-person meeting behind closed doors with the heads of SPN affiliates around the country, Sharp "compared the organization's model to that of the giant global chain IKEA":

"At the annual meeting, which took place in Oklahoma City this past September 24th through 27th, Sharp explained what she called The IKEA Model. She said that it starts with what she described as a 'catalogue' showing 'what success would look like.' Instead of pictures of furniture arranged in rooms, she said, S.P.N.'s catalogue displays visions of state policy projects that align with the group's agenda. That agenda includes opposing President Obama's health-care program and climate-change regulations, reducing union protections and minimum wages, cutting taxes and business regulations, tightening voting restrictions, and privatizing education. 'The success we show is you guys,' she told the assembled state members. 'Here's how we win in your state.'"

"Sharp went on to say that, like IKEA, the central organization would provide 'the raw materials,' along with the 'services' needed to assemble the products. Rather than acting like passive customers who buy finished products, she wanted each state group to show the enterprise and creativity needed to assemble the parts in their home states. 'Pick what you need,' she said, 'and customize it for what works best for you.'"

"During the meeting, Sharp also acknowledged privately to the members that the organization's often anonymous donors frequently shape the agenda. 'The grants are driven by donor intent,' she told the gathered think-tank heads. She added that, often, 'the donors have a very specific idea of what they want to happen.' She said that the donors also sometimes determined in which states their money would be spent."

For more about the SPN web, see our report here and The New Yorker article here.