-- by Harriet Rowan and Alex Oberley

Three State Capitols around the country are echoing with the songs and chants of people who feel scorned by their state government.

In Wisconsin, protesters who participate in a daily sing-along are facing a crack down from the Capitol Police, with over 50 people arrested in three days. In Florida a group called the Dream Defenders has been occupying the State Capitol for 13 days, demanding that Governor Rick Scott call a special session to address the repeal of Florida's "Stand Your Ground" law and to address racial profiling. And in North Carolina, civil rights and religious organizations are organizing weekly protests at the Capitol, dubbed "Moral Mondays," to express their opposition to an avalanche of retrograde policies that are radically reshaping the state. 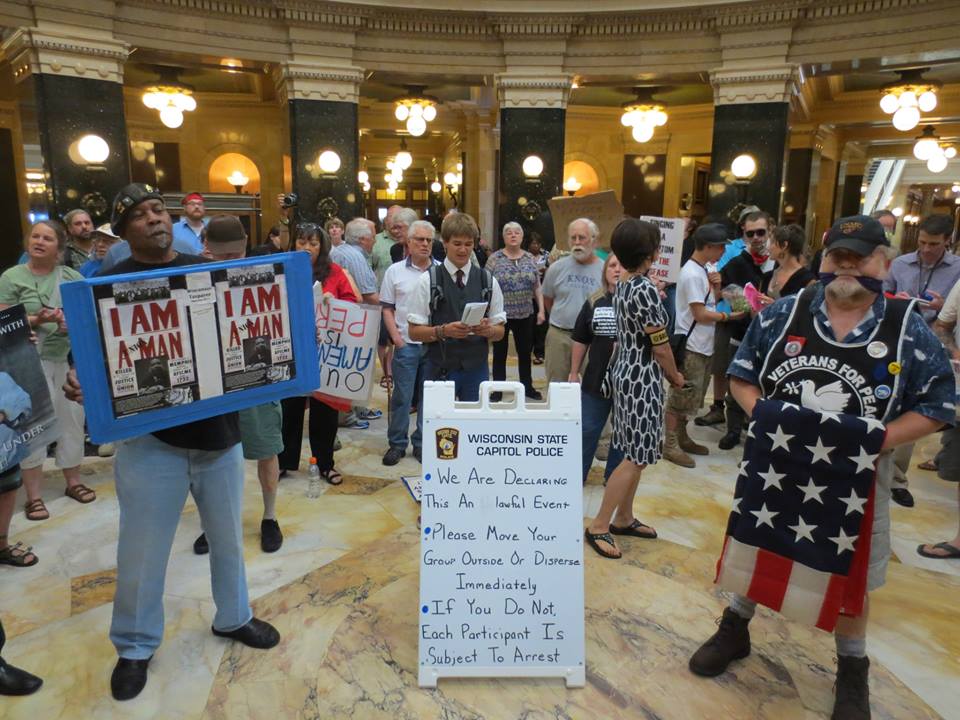 The Wisconsin State Capitol has been the site of a daily sing-along since March of 2011, an act of political dissent rooted in the February 2011 occupation of the Capitol, sparked by the governor's efforts to end collective bargaining in the state. The Capitol Police and Governor Scott Walker's administration have attempted many times to put a stop to the protest, and have finally resorted to declaring it an "unlawful assembly," and arresting participants and observers.

The Capitol Police first declared an unlawful assembly two weeks ago, just days after a judge issued a preliminary injunction saying that the Department of Administration rules requiring small groups of protesters to get a permit, could not be enforced on groups fewer than 20. The local chapter of the National Lawyers Guild have condemned the police's action: "after U.S. District Court Judge William Conley issued an injunction against enforcement of the Wisconsin Administrative Code and Capitol Access policies on July 8, the Wisconsin Department of Administration tried to snatch victory from the jaws of defeat in their ongoing campaign to stifle voices of dissent in the Capitol... Dept. of Administration Secretary Michael Huebsch... claimed that the state was 'enforcing' Judge Conley's ruling, as if the judge had directed arrests. The decision issued in the lawsuit filed against Huebsch and Capitol Police Chief David Erwin did not direct arrests. Nor did it find that the state's permitting scheme was constitutional, despite such claims by DOA spokesperson Stephanie Marquise."

Since July 24, over 50 people have been arrested and given tickets for $200.50 for "no permit." Those arrested include two reporters from a local radio show, many elderly men and women, moms with kids, and two clergymen, one of whom experienced a medical emergency while in custody and was taken to the hospital. A United States Marine Corp veteran who had a symbolic gag in his mouth was also arrested, and in the process a flag he was holding fell to the ground and was trampled by police.

"Here's my two cents -- free speech isn't free. In our State Capitol, free speech will cost you $200.50, a big surge of adrenaline, tight handcuffs, and a sprinkle of humiliation. Still, it's a small price to pay for defending such a cherished right," says Linda Hedenblad who was arrested on July 25. Participants in the sing-along plan to continue coming to the Capitol every weekday to sing, and many of those who have been arrested and ticketed plan to challenge their tickets in court. 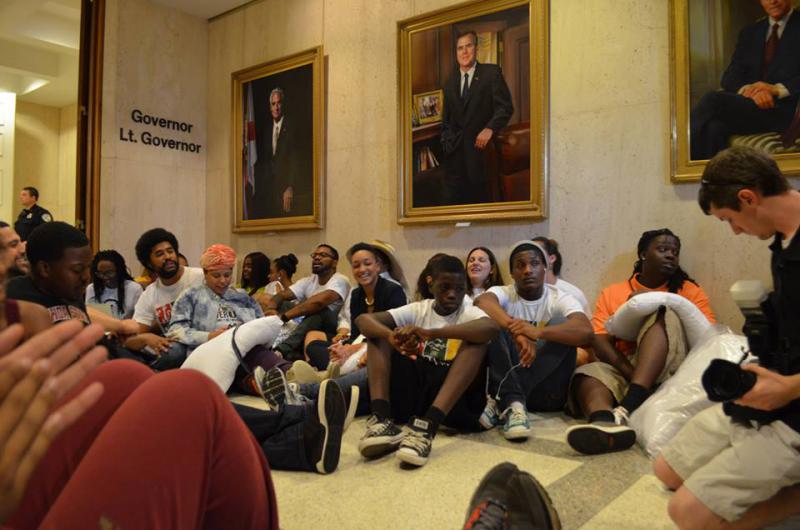 The outrage in response to the acquittal of George Zimmerman for the shooting of the unarmed teenager, Trayvon Martin, has spurred a group of young people, organized by the Dream Defenders, to take direct action in Florida, sitting in at the state Capitol since Tuesday, July 16. The group is staging the "dream-in" and "calling on the Governor to convene a special session of the legislature to enact Trayvon's Law to repeal Stand Your Ground, ban racial profiling, and end the school-to-prison pipeline."

So far, the Dream Defenders have been allowed to stay in the Capitol and have been largely left alone by the police. To date no arrests have taken place. Governor Rick Scott did meet with the group, but clarified that he had no intention of reviewing or repealing "Stand Your Ground" law.The Dream Defenders insist that they will not leave the Capitol until their demands have been met.

As CMD has previously reported, Florida's Stand Your Ground law was pushed through by the NRA which later took the bill to the American Legislative Exchange Council (ALEC) where it was adopted as a "model" and subsequently spread across the country. The shooting of Trayvon Martin, the fact that George Zimmerman was originally protected from arrest by Florida's "Stand Your Ground" law, and the role of Stand Your Ground in shaping the instructions and options given the jury at the conclusion of the case, brought national attention to ALEC's pro-gun history.

In 2010, North Carolina saw historic gains by Republicans as they seized both legislative houses, followed by the election of Pat McCrory as governor in 2012. Republicans have not held this kind of power in North Carolina since 1870. Their efforts to transform the state have generated sustained citizen push back. Every Monday since April 29, North Carolinians have rallied on Halifax Mall in front of the Legislative Building, with volunteers organizing the participants with directions like "marchers on the right, civil disobedience on the left."

Some 900 people have chosen to be peacefully arrested for the "crime" of being in the Capitol building after closing. 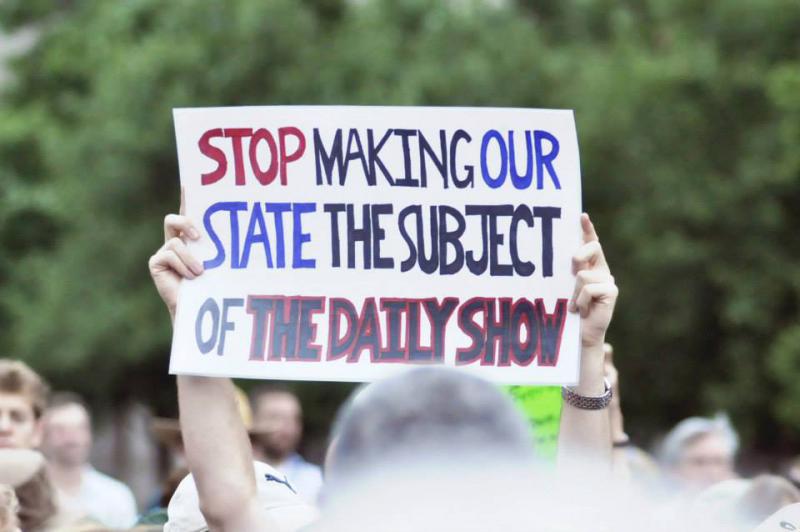 Moral Mondays has been a concerted effort by the diverse "Forward Together" coalition to demonstrate their shared anger and anguish over the "juggernaut" of regressive legislation that has rapidly become law under the new Republican majority.

This juggernaut includes the rejection of Medicaid expansion funds, 70,000 North Carolinians losing their extended unemployment benefits, drug testing of welfare recipients, tax cuts for the rich costing the state $1.6 billion over five years, the expansion of the state's private-school voucher program, abortion restrictions tucked into a motorcycle safety bill in the House and an anti-Sharia law bill in the Senate, and most recently the most aggressive voter-suppression bills in the country.

"The goal of Moral Monday," proclaims Reverend William Barber II, president of the North Carolina NAACP, "is to dramatize the shameful condition of our state."

The legislature's actions have not been popular. Raleigh-based Public Policy Polling has found support for these various policies between 13 and 29 percent; many more North Carolinians support the action of the Moral Monday participants. Despite the legislature's disregard for the historic outpouring of citizen action and engagement, organizers are not giving up. The thirteenth consecutive Moral Monday will take place on July 29 -- "forward together, and not one step back."

Do we have short memories? Is there a thinking mind among the leadership in these states? It seems to me it was the USSR , China, and a few other countries that we criticized for their people's inability to protest. And it seems to me we fought a war in Europe when the Nazi's were pulling some of this stuff. We keep hearing from the right wing that there should be LESS government in our lives...they seem to want more government control of our minds, and our bodies...so much for less government!
The right wing want less government to help people that need help, but more government that that arrests those who protest against right wing policies.