The Illinois legislature has passed a fracking regulatory bill, expected to be signed into law by the governor, hailed by some environmental groups as the "toughest in the country." But other groups are highly critical, both of the bill and of the way some big environmental groups worked with legislators and industry to pass it into law. 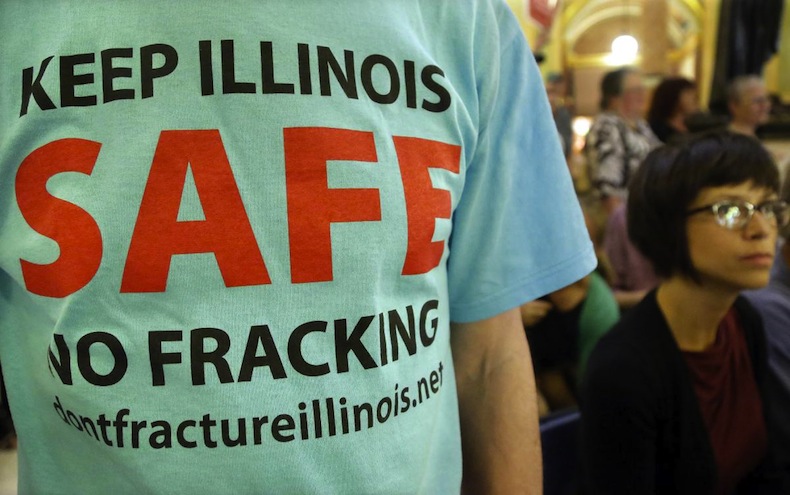 The Hydraulic Fracturing Regulation Act (SB1715), which passed the Senate on June 1 as one of the final votes of the session, reins in unrestricted fracking to create a legal framework to permit and regulate fracking in the state. The bill has divided environmentalists, with some arguing that the regulations are set to encourage a fracking gold rush in Illinois.

Groups Had Called For Moratorium, Not Regulation

In recent years, some environmental groups in Illinois have been calling for a moratorium on fracking in the state, getting so far as having a bill in the Assembly in both 2012 and 2013. But the bills never made it out of committee. Until the new law comes into effect, fracking in Illinois is unregulated, meaning for the cost of a $100 permit an operator can set up and drill without having to meet standards set by the state. How much this happens is not actually known.

According to records obtained under the Illinois public records law by the Natural Resources Defense Council (NRDC), at least once operator -- Campbell Energy, LLC -- has been fracking for oil in White County, in the southern part of Illinois. They are the first known to have done so.

NRDC were one of the groups calling for a fracking moratorium in recent years, and that is actually still their stated position, but in recent months they, along with groups including the Sierra Club, have sat down with representatives from industry including the Illinois Oil and Gas Association (IOGA) to negotiate the law that passed the legislature last week.

"Fracking should not be taking place in Illinois, but it is," said NRDC Midwest Director Henry Henderson in a statement. "More science, and more protections are needed for our health and safety. We would prefer a moratorium on fracking, but cannot ignore the current reality that unregulated fracking is already endangering the citizens of this state."

According to NRDC President Frances Beinecke: "...the bill would provide some important, immediate protections against an existing and legal threat that otherwise are not in place to meet the present realities of legal, unrestricted fracking."

The protections include the requirement to disclose details of chemicals used in the fracking process. Although this disclosure requirement does not go as far as some advocates would like, and while it does include a provision for companies to claim that the chemicals are "trade secrets," the Illinois law includes more protections than similar provisions in other states. The American Legislative Exchange Council (ALEC) has been promoting its own fracking bill since 2012. The ALEC bill includes a very broad "trade secrets" loophole, which features none of the protections in the Illinois bill such as a duty on the part of the operator to justify their claim to keep the chemicals secret.

While some press reports are calling the compromise between industry and environmental groups a "potential model for other states," others disagree and think that the NRDC and the other groups have allowed themselves to be used by industry.

According to Dawn Dannenbring, Lead Organizer of Illinois People's Action, the single identified wildcat driller in southern Illinois should not be used as justification for opening the floodgates to fracking.

"Industry has been waiting in Illinois, because they were concerned about what legislation would be passed," Dannenbring told CMD. "There has been an increase in the number of leases signed since the negotiations on the regulations started." While its possible that there are other incidents of fracking having taken place in Illinois, according to Dannenbring the negotiations over the regulations has led to increased confidence by the larger operators and an increase in the signing of new well leases in anticipation of the regulations. 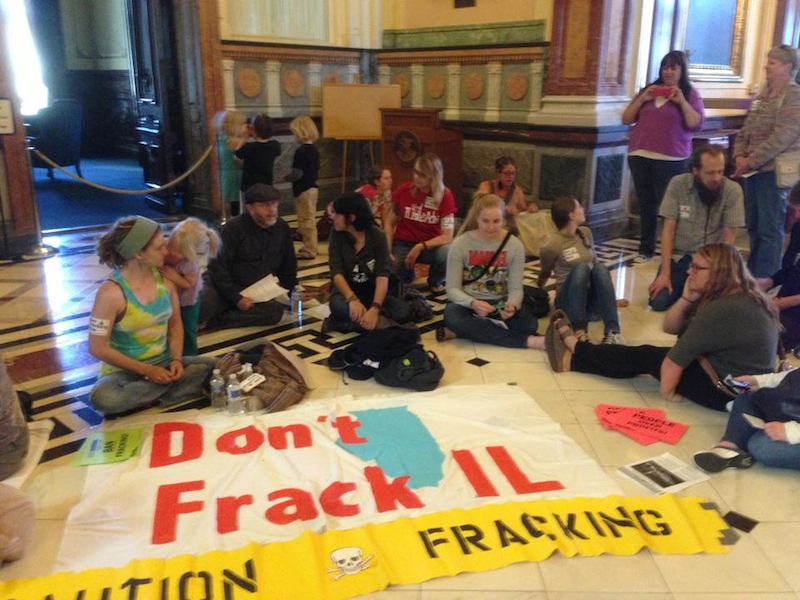 Illinois People's Action, along with groups including Food and Water Watch, Southern Illinoisans Against Fracturing our Environment (SAFE), 350.org and Breast Cancer Action, have been campaigning against the legislation and calling for a moratorium. Most recently, on May 24th activists held a sit in protest outside the governor's office in Springfield, Illinois, which led to three arrests for non-violent civil disobedience. During an Illinois Assembly hearing the same day, the Academy Award-nominated director of the anti-fracking film Gasland, and Sandra Steingraber, the acclaimed ecologist and author of Raising Elijah testified against the bill.

The groups have many criticisms of the bill, both because of concerns they have over its content, but they are also critical of the other environmental groups willingness to negotiate on regulating an industry that they say cannot possibly be done in a manner that protects water and the environment. "This bill is being touted as a compromise between environmentalists and industry, to allow fracking to come in 'safely.' But there is no such thing as safe fracking," Dannenbring told CMD. They point to a nationwide EPA study on the effect of fracking, which other states including New York are waiting on before making a decision.

Regulated Fracking in Other States Has Not Worked

According to Illinois People's Action, regulation of fracking in other states has not worked. There have been more than 3,000 fracking regulatory violations in Pennsylvania since 2009, including 224 of "failure to properly store, transport, process or dispose of residual waste" and 143 for "discharge of pollutional material to the waters of Commonwealth."

The Illinois law will allow fracking within just 301 feet of lakes. Operators will need to submit a plan as to where they will source the water used in the fracking process, but the law does not give state or local government the power to limit water usage, even during the type of droughts that are increasingly common because of climate change. According to the Illinois People's Action analysis, it would take just 73 wells drawing from Lake Bloomington to drain it dry. The lake is one of two sources of water for the city of Bloomington.

The Illinois Department of Natural Resources (DNR) will now begin a rule making process, to implemet the newly passed law. That process is expected to take 3-6 months. According to the Washington Post, the DNR will need to hire more than 50 "engineers, inspectors, lawyers and other experts," to set up their regulatory system. Fracking operators will need to register and qualify before applying for permits. All of that will take some time.

"I think that fracking should not move forward in Illinois until the whole process ... is completed," Henderson told the Washington Post. On that point at least, the NRDC will probably find they can find agreement with the rest of the environmental community.

A minor factual error. Negotiations with industry did not begin a few months ago. They began well over a year ago. Also, NRDC, Faith-in-Place and other groups were working on smaller compromise regulatory bills over two years ago. That meant legislators knew they never had to take the moratorium idea seriously. They waited for the big compromise bill they knew was coming. There was never a serious fight for a moratorium. NRDC isn't going to win any points with the environmental community in Illinois with this face-saving version of what happened. Too many people know it isn't true.
I agree with the other commenters -- the claims by Illinois environmental groups that they would have preferred a moratorium and only reluctantly agreed to support a regulatory bill are revisionist history. In 2012, a regulatory bill that was even weaker than the bill that passed this year passed the Illinois Senate overwhelmingly with the support of Sierra Club, Faith In Place and other environmental groups. These groups were always looking to strike a deal and declare victory for themselves. If they had spent even half the time working with those of us downstate who are now in harm's way because of their bill that they did trying to pass it, the politics could have been different.
And while the environmentalists fight each other, the frackers laugh all the way to the bank...
If the Sierra Club, NRDC, Faith in Place, Illinois Environmental Council etc. hadn't siphoned away all their energy to cozy up to industry and politicians to work on that weak, non-protective regulatory bill, and we had all worked together, Illinois would have the moratorium we deserve and desperately need. Thanks for nothing, Big Green.