"Citizen Koch," a documentary about money in politics focused on the Wisconsin uprising, was shunned by PBS for fear of offending billionaire industrialist David Koch, who has given $23 million to public television, according to Jane Mayer of the New Yorker. The dispute highlights the increasing role of private money in "public" television and raises even further concerns about the Kochs potentially purchasing eight major daily newspapers. 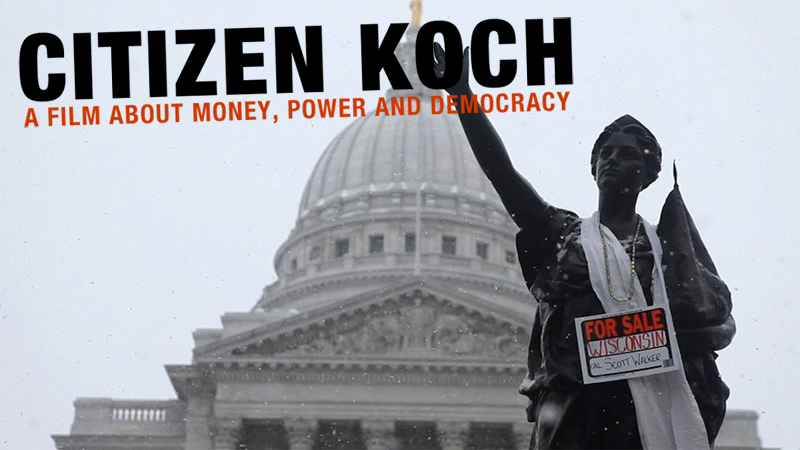 The film from Academy Award-nominated filmmakers Carl Deal and Tia Lessin documents how the U.S. Supreme Court's Citizens United decision helped pave the way for secret political spending by players like the Kochs, who contributed directly and indirectly to the election of Wisconsin Governor Scott Walker in 2010 and came to his aid again when the battle broke out over his effort to limit collective bargaining.

Originally slated to appear on PBS stations nationwide as part of the "Independent Lens" series, "Citizen Koch" had its funding pulled after David Koch was offended by another PBS documentary critical of the billionaire industrialists.

"People like the Kochs have worked for decades to undermine public funding for institutions like PBS," Deal told the Center for Media and Democracy. "When public dollars dry up, private dollars come in to make up for the shortfall."

And that private funding can conflict with PBS' "public" mission and its editorial integrity. The PBS distributor "backed out of the partnership because they came to fear the reaction our film would provoke," Deal and Lessin said in a statement. "David Koch, whose political activities are featured in the film, happens to be a public-television funder and a trustee of both [New York PBS member station] WNET and [Boston member station] WGBH. This wasn’t a failed negotiation or a divergence of visions; it was censorship, pure and simple.”

In November of last year, the New York PBS affiliate WNET aired a documentary by Oscar-winning filmmaker Alex Gibney, "Park Avenue," that explored growing income inequality by contrasting the lives of residents in a luxury apartment building in Manhattan with individuals living on the other end of Park Avenue, in the Bronx. The film focuses on one of the apartment's wealthiest residents, David Koch, and does not paint a particularly positive image of the billionaire industrialist and his brother, Charles.

Koch is also a board trustee and major donor to WNET. And WNET's president called him before the documentary aired to alert Koch to the critical content -- and took the nearly unprecedented step of airing a disclaimer from Koch following the film calling it "disappointing and divisive." WNET also replaced the original introduction to the film, which had been narrated by actor Stanley Tucci, with one calling the film "controversial" and "provocative."

“They tried to undercut the credibility of the film, and I had no opportunity to defend it,” the film's director Gibney told Mayer. "Why is WNET offering Mr. Koch special favors?"

Independent Television Service (ITVS), an arm of PBS that funds and distributes independent films, had funded "Park Avenue," and aired it as part of ITVS' popular "Independent Lens" series that runs on dozens of PBS member stations. ITVS also funded "Citizen Koch" and it was also slated to be aired on the Independent Lens series.

But "Citizen Koch" got caught in the blowback.

ITVS was excited about the "Citizen Koch" documentary before "Park Avenue" aired. In April 2012, the company informed Deal and Lessin their film would receive $150,000, and that “Everyone here at ITVS looks forward to working with you on your very exciting and promising program.”

But once "Park Avenue" aired, WNET blamed ITVS for impacting its relationship with David Koch and not providing advance notice of the film's contents. Mayer writes:

"[WNET President Neal] Shapiro acknowledged that, in his conversations with ITVS officials about 'Park Avenue,' he was so livid that he threatened not to carry its films in the future. The New York metropolitan area is the largest audience for public television, so the threat posed a potentially mortal blow to ITVS."

ITVS got the message, and quickly changed its tune on "Citizen Koch."

Lessin and Deal began receiving pressure from ITVS executives to change the title and de-emphasize the Kochs' political influence. One executive told the filmmakers the title was "extremely problematic" and that “we live in a world where we have to be aware that people with power have power.”

On a conference call in January, ITVS executives acknowledged the push-back from WNET over the "Park Avenue" film, and again urged the filmmakers to change the storyline. Sources told Mayer that what their message was "Get rid of the Koch story line ... Because of the whole thing with the Koch brothers, ITVS knew WNET would never air it."

"It is always a struggle for documentaries to get out there," Deal told CMD. "That's why PBS and ITVS are so important: they support independent filmmakers to say new things on the public airwaves." But because of funding pressures, "we won't have access to that audience now," he said. "We're disappointed."

"Citizen Koch," which premiered at Sundance in January and competed for Best Documentary, followed the activism and struggles of former Republicans who felt betrayed by Walker's union-busting move (which he never mentioned on the campaign trail). The film documents the role of Koch-funded entities like Americans for Prosperity, which spent $10 million aiding Walker in his recall election. The film's final scene shows an Americans for Prosperity official making the incredible claim the group is "just like the Red Cross, just like any other nonprofit.”

In April of this year, one day after the film had its Dairy State premiere at the Wisconsin Film Festival, ITVS informed Lessin and Deal it had "decided not to move forward with the project."

In a statement, the filmmakers said this is an ironic turn: “It’s the very thing our film is about—public servants bowing to pressures, direct or indirect, from high-dollar donors.”

ITVS wrote in a prepared statement: “ITVS commenced negotiations to fund the film ‘Citizen Corp’ based on a written proposal. Early cuts of the film did not reflect the proposal, however, and ITVS ceased negotiations.” The filmmakers disagreed. “The film we made is identical in premise and execution to the written and video proposals that ITVS green-lit last spring," they said in a statement.

"I don't believe there was a concerted conspiracy to keep 'Citizen Koch' off of public television, with David Koch as a ringleader," Deal told CMD. "Instead, Koch's presence and role in that world created an environment that was hostile to our message. And that was enough."

Just before Mayer's New Yorker article was published, on May 16, David Koch resigned from WNET's board. The resignation was the result, a source told Mayer, "of his unwillingness to back a media organization that had so unsparingly covered its sponsor."

As has been widely reported, the Kochs are now considering a purchase of eight major daily newspapers currently owned by the Tribune Companies. And that has Deal worried.

"For anybody who says the owner or funder of an outlet doesn't have an impact on what gets published, I hope they'll think again."

Want to see the film the Kochs don't want you to see? Visit the Citizen Koch website and organize a screening in your area.