The election is over, but the fight to save the planet from the rapacious fossil fuel industry is just gearing up. Hurricane Sandy reminded us that our slowly warming planet will continue to produce bigger and more dangerous monster storms, coupled with other types of severe weather, until we begin to address climate change with the urgency it deserves.

Bill McKibben, a leading climate crusader and founder of 350.org, hammered this point when he embarked on a national "Do The Math" sustainable-fuel bus tour the day after the election. McKibben hopes to hit the fossil fuel industry where it hurts the most, on its bottom line. He will be visiting college campuses across the nation demanding that they divest from an industry which appears hell bent on killing the planet. He will be joined by other leading voices including The Nation magazine's Naomi Klein and Josh Fox, director of the documentary film Gasland which documents the dangers associated with hydraulic fracturing or "fracking" for shale oil and gas.

While Obama has a better track record than Romney on supporting renewable energy and has increased fuel efficiency standards for cars, the administration has not tackled the topic of climate change in a serious and comprehensive way and has impeded international agreements to do so.

As CMD has reported the industry saturated the airwaves this election cycle with urgent demands to drill, frack, burn. Hydraulic fracturing is on the rise and the International Energy Agency just announced that the U.S. is set to become the world's biggest oil producer within 10 years, surpassing Saudi Arabia. 350.org hopes to reverse these trends and start a national movement to push the White House and Congress to act on climate change.

Hit the Fossil Fuel Industry Where it Hurts Most 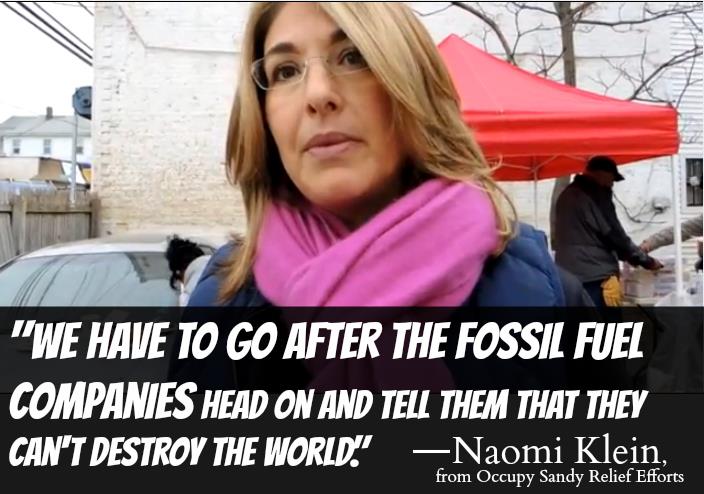 350.org, along with the Responsible Endowments Coalition, Sierra Student Coalition, Energy Action Coalition, California Student Sustainability Coalition, and more, is launching a divestment campaign to convince colleges and universities to lead the way and pull their endowment funds from fossil fuel companies.

Modeled on the successful effort to get colleges, pension funds, churches, cities, and states to divest from apartheid South Africa, the groups are asking ethical investors to freeze new investments in fossil fuel companies and divest from direct ownership or commingled funds, which include public equities and corporate bonds. The top 500 colleges and universities alone hold endowments worth an estimated $400 billion. Removing fossil fuel investments from this sum, will make "ExxonMobil, Shell, and Peabody sweat," says 350.org.

The campaign is targeting 200 publicly traded companies which hold the majority of the world's fossil fuel reserves. These firms include Severstal JSC, Anglo American PLC, BHP Billiton, Shanxi Coking Co. Ltd., Exxaro Resources Ltd., Lukoil Holdings, Exxon Mobil Corp., BP PLC, Gazprom OAO, and Chevron Corp. The climate campaigners want these firms to stop exploring for new hydrocarbons and to keep 80 percent of their current reserves underground if there is any hope in turning the tide on the damage already done. While these demands seem extreme, scientists believe this is what is needed to reverse the planet's dangerous warming curve.

Some are already heeding the call. Unity College in Maine was the first to respond to the coalition's call. On November 5, 2012, the college announced that its Board of Trustees voted to divest from fossil fuel companies.

"The time is long overdue for all investors to take a hard look at the consequences of supporting an industry that persists in destructive practices," Unity College President Stephen Mulkey wrote. "Higher education has always been dedicated to the highest standards of honesty and integrity. If our nation's colleges and universities will not take a stand now, who will?"

Squeezing the companies themselves is one tactic in the fight, another critical battle is stopping the Keystone XL pipeline which is slated to bring heavy tar sands crude oil from Canada to Gulf Coast refineries to sell on the U.S. market and to ship overseas. Although the Obama administration has delayed approval of the Keystone XL pipeline after 350.org and other groups organized over 1,500 peaceful arrests last year, a final decision on the pipeline is pending in 2013, making it a top policy priority for climate change campaigners. They will be sponsoring a rally in Washington, DC on November 18 to convince the Obama administration to finally reject the pipeline. The administration denied the pipeline's northern permit last January, but has allowed TransCanada to reapply for a permit with a new proposal for an alternate route that avoids the Nebraska Sandhills. The extraction related to the pipeline would add 900,000 barrels of oil worth of carbon to the atmosphere every day.

It is important to note that TransCanada, which already started building the Southern portion of the pipeline, is expecting that Obama will approve the pipeline's final link.

With its post-election bus tour, 350.org hopes to provide a "launchpad for a new kind of movement" to combat climate change. The tour will be stopping in 21 cities in 21 nights. The tour started in Seattle, but will head to the east coast and places in between before ending in Salt Lake City. The tour will highlight the findings on climate change featured in McKibben's July Rolling Stone piece "Global Warming's Terrifying New Math." Some of the most compelling figures from this article include:

The Cost of Inaction

Twenty years of knowledge, but inaction on climate change has only made the situation much worse. The continental United States is on track to have had the warmest year on record, and a summer drought and one of the worst wildfires in history devastated American communities. Even the private sector is taking heed. In October, a German reinsurance company, Munich Re, released a report on severe weather in North America. The report noted that "nowhere in the world is the rising number of natural catastrophes more evident than in North America." The report found "a nearly quintupled number of weather-related loss events in North America for the past three decades," with damages totaling $1.06 trillion.

Obama added climate change to his list of concerns in his victory speech, but 350.org is asking that people take concrete action to keep the pressure on Obama and "let the President know we haven't forgotten, and that our conviction hasn't cooled."

To find out when the bus tour reaches your city, click here and join 350.org at the White House on November 18.