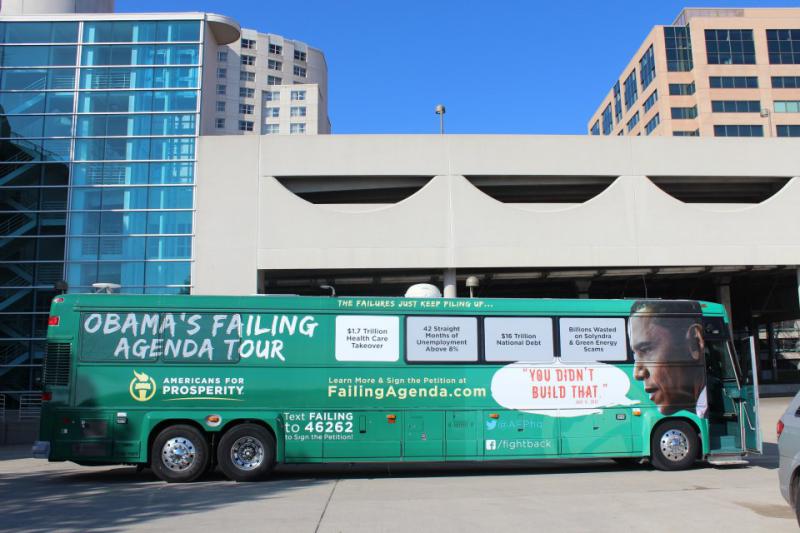 On Sunday, Madison's Monona Terrace hosted a rally for the Americans for Prosperity (AFP), a "grassroots" nonprofit founded and funded by billionaire industrialist David Koch. AFP's last-minute Wisconsin rallies are the final move in their sprawling "Obama's Failed Agenda" bus tour, which is criss-crossing the nation with multiple buses and rallies in a final push to mobilize the Tea Party base. Despite the name, AFP has claimed in numerous press releases that their tour is "non-partisan." However, in Madison, AFP counted on three very partisan speakers: Canadian "health care refugee" Shona Holmes, Wisconsin talk-show host Vicki McKenna, and right-wing author and agitator Ann Coulter.

Ann Coulter "Still Clinging to My Guns and My Religion"

The centerpiece of the rally was a speech by Coulter. Audience members were requested to put away video cameras and tape recorders before Coulter began speaking. She opened by proclaiming "I'm Ann Coulter, and I'm still clinging to my guns and religion," before segueing into effusive praise for Wisconsin's former Senator Joe McCarthy, "that great American patriot." She also dispensed a few cursory opinions on energy policy ("No war for oil?...If there was ever a reason to go to war, oil is a reason,") and national defense ("You can't hug a child with nuclear arms?...Well you can't destroy a small Russian city with an American child.") 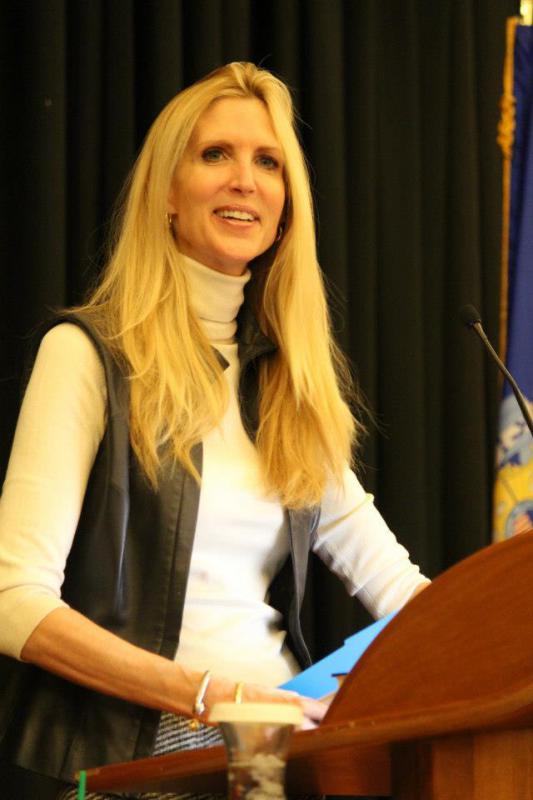 Coulter used a large portion of her speech to promote her new book "Mugged: Racial Demagoguery from the Seventies to Obama." According to Coulter, "liberalism is the new black," and "after four years of the Obama presidency, their best argument is: 'you're a racist if you don't elect this black Jimmy Carter.'" Coulter repeated her frequently-stated belief that the Democratic party panders to minority voters in order to advance its true agenda: "Their constituency is not old people, poor people...or minorities...their constituency is government workers." Coulter stated that she preferred the Romney/Ryan ticket, saying of Romney "I know if he becomes president, he'll do the right thing." Coulter was quick to reassure her audience, however, that the Romney/Ryan plan to effectively privatize Medicare "does not touch anyone 55 years old or older."

Coulter attacked any federal attempt to regulate or police the healthcare industry, stating that, in her opinion, the skyrocketing cost of health care was "100% created by the government," and that, despite having driven to the event on the Interstate system built by Eisenhower "everything provided by the free market over time will become better and cheaper...everything provided by the government over time will become more expensive and worse." Later in her speech she contrasted Obama's response to the 2008 financial collapse with the administration of 1920's-era Republican Calvin Coolidge. In Coulter's opinion "Calvin Coolidge was a great president," because when he encountered the financial difficulties of the early 1920's, his response was to "do nothing...and we had the roaring twenties." Coulter lamented that, unfortunately, "when the Great Depression hit, we had a Democrat in charge," apparently forgetting that the first three years of the Great Depression happened under a Republican, Herbert Hoover. Coulter closed by reminding her audience that in its entire history, the United States "has been a power only for good." and that it is "the only non-imperial superpower left in the world." She warned that if "Obamacare is not repealed in the next few years...it never will be...that's it, lights out, it's over." 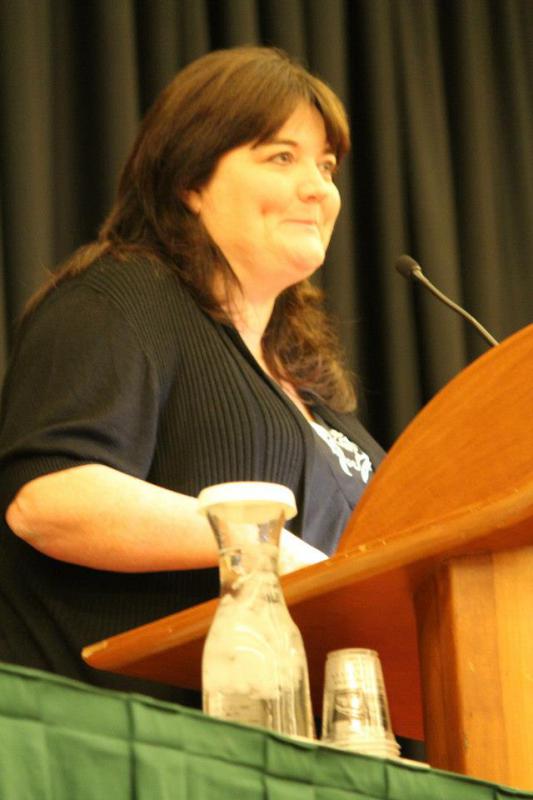 Holmes opened at the rally, delivering a speech nearly identical to the speech she gave at a 60 Plus Association meeting in Madison just a few weeks ago.

Holmes claims to have fled to the United States from Canada in order to receive urgent medical care for a tumor on her optic chiasm, and that her experiences with both health care systems have lead her to conclude that the health care system in Canada (which is largely free) is inferior to the health care system in the United States (which is prohibitively expensive for many Americans). Holmes warned the crowd: "You have to keep your government as far away from your doctor as possible." Holmes said she had "no skin in this election whatsoever," and simply wanted to warn Americans about "what is happening in Canada."

She is heavily invested in the mission of AFP and other Tea Party groups pushing to overturn the Affordable Care Act. (It is unclear what, if anything, she is being paid, and by whom.) Holmes has been a frequent fixture at AFP rallys this year, and also appeared in an ad AFP ran earlier this year which echoed her claims and was simply titled "We Must Replace President Obama." Her speech was followed by a short speech by local radio personality Vicki McKenna, who rallied the audience to vote against Obama: "He needs this state, and we're not gonna give it to him."

At the event, tables staffed by AFP members offered informational brochures and DVDs, including copies of Joel Gilbert's piece, "Dreams from my Real Father", which peddles the claim that Obama's real father was African-American socialist John Marshall Davis. Over the past month, Gilbert has distributed his film at numerous Tea Party events and purportedly mass-mailed it to 2.7 million people in swing states. The film alleges that Obama orchestrated a massive conspiracy to conceal his true paternity, going so far as to receive covert plastic surgery to hide his resemblance to Davis. Apparently, it is worse to be born of a socialist in some circles than to be born in a foreign country.

The rally was attended by about 250 people, including a handful of Madison police officers and AFP staffers.