Is Campaign Contribution to Walker Payback for Corporate Welfare?

Last year, Wisconsin Governor Scott Walker set his sights on getting Illinois businesses to move to Wisconsin, and one of the few corporations to take him up on the offer received millions in grants and tax credits. That largesse might have translated into big contributions to Walker's campaign. 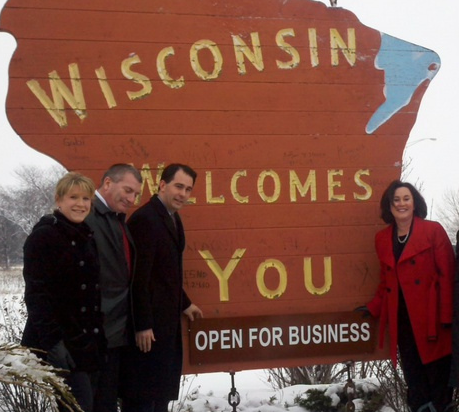 Upon taking office in 2011, Governor Walker wrote a column in the Chicago Tribune urging Illinois businesses to re-locate to Wisconsin, and his administration erected a sign on the state border with Illinois announcing Wisconsin was "open for business."

Illinois, like Wisconsin, elected a new governor in 2010 -- Democrat Pat Quinn -- and both confronted budget problems in the aftermath of the Wall Street crash in late 2008. But the two governors took very different approaches.

Quinn raised taxes in Illinois, while Walker cut about a billion dollars in funding for education and used the perceived "crisis" to attack political enemies like public labor unions (through collective bargaining restrictions) and trial attorneys (through "tort reform" measures that make it harder for residents of Wisconsin to sue corporations whose products injure or kill people). Although Walker and many Republicans insisted Quinn's policies would cause the Illinois economy to tank and that companies would flee to Walker's new "business-friendly" Wisconsin, quite the opposite happened -- during the first year in office for Governors Quinn and Walker (the twelve months ending in February 2012), Illinois gained 32,000 jobs and Wisconsin lost 16,900 jobs.

But in early 2011, Walker appeared convinced that there would be a corporate exodus from Illinois to Wisconsin.

Luring the Catalyst Exhibits Corporation to the Dairy State

In March of 2011, Governor Walker proudly announced that one company had taken him up on the offer -- Illinois-based Catalyst Exhibits, which makes items for trade shows, would be moving to Wisconsin.

"We're hoping it's one of many more to come," Walker said.

That has not happened.

Despite Walker creating a supposedly "business friendly" climate and offering financial incentives, only a handful of companies have moved to Wisconsin -- and several Wisconsin companies have relocated to Illinois.

Getting Catalyst Exhibits to come to Wisconsin was not cheap. Walker's administration lured them in with a half-million-dollar state grant and a $1.2 million low-interest loan from the Kenosha Area Business Association. A "relocation tax credit" bill sponsored by Racine Senator Van Wanggaard gave Catalyst Exhibits and its owners two years of tax-free living in Wisconsin by forgiving corporate and individual income taxes.

At the time, some called the incentives "corporate welfare," and pointed out that the state was spending $500,000 plus two years of unpaid taxes to attract just over 100 jobs.

Although the deal ended up costing Wisconsin taxpayers a lot of money for Walker and Wangaard to attract just a handful of jobs to the state, the investment in Catalyst Exhibits appears to have paid off for the governor.

Last Wednesday, on May 30, two Catalyst executives, Paul Stahlberg and Tim Roberts, donated $40,000 to Walker's campaign ($20,000 each). Each gave double the $10,000 individual contribution limit now in place. Walker is only allowed to accept donations in excess of that limit to repay debts accrued earlier in the campaign.

Did Walker get $40,000 in campaign contributions because Catalyst Exhibits received millions in tax credits, grants, and loans?

What do Walker's other big-money donors -- some of whom gave upwards of $500,000 -- expect in return for their contributions?

"What do Walker's other big-money donors -- some of whom gave upwards of $500,000 -- expect in return for their contributions?" They expect the Wisconsin GOP to privatize everything and hand them the keys so they can crush the private sector unions, and make everybody whore for their jobs. It's called "Right to Work - for less."
I believe the GOP wishes to repeat the wage levels received by laborers and middle class citizens during the Great Depression. All of their actions and beliefs point inevitably in that direction. Vast fortunes for the wealthy millionaires were gained in those times, so I think that is what their final goal is. Of course, their final wish would be to become an imitation of ancient Britains' Kings, Barons and other members of Royalty. They already have that attitude and the machinery of Congressional and Senate power in Washington. America has certainly come a long way away from its origins!
I do wish the people of Wisconsin well in their effort to rid themselves of Scott Walker, but there are some lessons here that the left needs to learn: 1) The Democratic Party has done next to nothing to help this effort because they aren't interested in working people, they are interested in gaining power in DC. 2) The idea that the power of the people and of organized labor should be directed into Democratic Party politics is a failed strategy and will remain so. 3) Elections post-Citizens-United are dominated by money, not ideas, and neither party has any intention of changing that since they both benefit from the corruption of our political process. Again what we have in Wisconsin is essentially a race between a Republican and someone whose main asset is that they are not a Republican. We are fighting for scraps from the 1%'s table instead of fighting for a new economic and political system ruled by the 99% and designed to benefit all the people.
Your article is interesting and provocative, but I believe your unemployment numbers are misleading, something I'm sure you wouldn't want to do, since your mission is to "report on spin and disinformation." Actually, Wisconsin's unemployment rate has declined steadily since the beginning of 2010. See: http://ycharts.com/indicators/wisconsin_unemployment_rate April 2012 is the most recent date for which data from the Bureau of Labor Statistics is available, and the rate was 6.7%, compared to 8.2% for the U.S. as a whole today.
You will note that the article discusses the job loss, not the unemployment rate. The unemployment rate can decline as people drop out of the workforce because they are disillusioned, they retire, or they move elsewhere. From the Wisconsin Budget Project (March 22, 2012): "The irony is that . . . there has been little or no increase in net jobs available in the state. As we noted in a recent Budget Project Blog post, Wisconsin actually lost more jobs than it gained in 2011 – and had the largest decline in any state. In fact, in February 2012, Wisconsin had nearly 17,000 fewer jobs than it did a year previously. However, we started that year with an unemployment rate well below the national average, and it has continued to decline slowly – thanks in part to discouraged workers leaving the workforce (often going back to school) and many public sector employees taking early retirement." http://wisconsinbudgetproject.blogspot.com/2012/03/length-of-unemployment-benefits-to-drop.html
That's a good clarification, Brendan, thanks for bringing it up. The troubling phenomenon of people dropping out of the labor force is nationwide, though as you note, the rate varies from state to state. Actually, from county to county. The only upside to this picture is that unemployment benefits paid by the state will decline, reducing the tax burden on the rest of the citizens. A small consolation to those who dropped out involuntarily.