Americans might remember that when the first mad cow was confirmed in the United States in December, 2003, it was major news. The United States Department of Agriculture (USDA) and the Food and Drug Administration (FDA) had been petitioned for years by lawyers from farm and consumer groups I worked with to stop the cannibal feeding practices that transmit this horrible, always fatal, human and animal dementia. When the first cow was found in Washington state, the government said it would stop such feeding, and the media went away. But once the cameras were off and the reporters were gone nothing substantial changed. 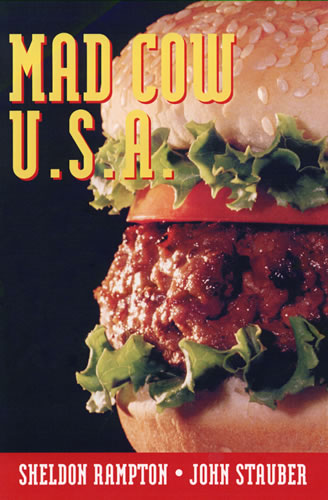 In the United States, dairy calves are still taken from their mothers and fed the blood and fat of dead cattle. This is no doubt a way to infect them with the mad cow disease that has now been incubating here for decades, spread through such animal feeding practices. No one knows how the latest dairy cow was infected, the fourth confirmed in the United States. Maybe it was nursed on cow's blood. Perhaps it was fed feed containing cattle fat with traces of cattle protein. Or perhaps there is a mad cow disease in pigs in the United States, which simply has not been found yet, because pigs are not tested for it at all, even though pigs are fed both pig and cattle byproducts, and then the blood, fat and other waste parts of these pigs are fed to cattle.

All these U.S. cattle feeding methods are long banned and illegal in other countries that suffered through but eventually dealt properly with mad cow disease. Here, rather than stopping the transmission of the disease by stopping the cannibal feeding, mad cow is simply covered up with inadequate testing and very adequate public relations. US cattle are still fed mammalian blood, fat and protein, risking human deaths and threatening the long term safety of human blood products, simply to provide the U.S. livestock industry with a cheap protein source and a cheap way to get rid of dead animal waste.

I began researching this issue around 1989, long before the disease was confirmed to have jumped from cattle to the people eating them, as announced by the British government in 1996. In 1997, I co-authored Mad Cow USA, warning that the disease was likely already here and spreading, since the animal cannibalism that caused its outbreak in Britain and spread it to other countries was actually more widespread in the United States than anywhere.

Some years ago, responsible U.S. beef companies wanted to test their animals for mad cow disease and label their beef as being disease free, but they were forbidden under penalty of law from doing so. Only the USDA can test for mad cows in America. In 2004 and 2005, after two additional mad cows were discovered in Texas and Alabama, the United Sates government declared that obviously mad cow wasn't much of a problem and gutted it's anemic testing program. Today only about 40,000 cattle a year are tested, out of tens of millions slaughtered. It's amazing that the California cow was even detected given this pathetic testing program that seems well designed to hide rather than find mad cows.

The prevention of mad cow disease is relatively simple. If your country has it, test each animal before it goes at slaughter to keep the diseased animals out of the food chain. Cheap, accurate and easy tests are now available in other countries but illegal here. Testing cattle both identifies the true extent of the disease, and keeps infected animals from being eaten in your sausage or hamburger. In this manner countries like Britain, Germany, France and Japan have controlled their problem through testing and a strict ban on cannibal feed.

Once mad cow disease moves into the human population of a country, all bets are off as to what could happen next. It's a very slow disease, it develops invisibly over decades in someone who has been infected, and it is always fatal. We'll know a lot more in fifty years, but the future looks worrisome. In Britain, people are dying from mad cow disease, people who never consumed infected meat. They used medical products containing human blood, and that blood was infected because it was from infected people. There is no test to identify infectious prions, the causal agent, in blood.

Almost none of this information appeared in news stories about the California mad cow. Instead the headlines and the talking heads fed us the line that the United States fixed this problem long ago, and the fact that only 4 mad cows have been detected so far is proof of our success. Oprah Winfrey once tried via her talk show to warn about this, way back in 1996, but Texas cattlemen dragged her and her guest Howard Lyman into court and she had to spend many millions of dollars defending herself from the supposed crime of slandering meat.

Oprah won her case, which was probably unfortunate for the rest of us because had she been convicted the ensuing appeals court trial might have gotten enough attention to wake up Americans to the truth. Instead, Oprah learned her lesson -- shut up and you won't get sued. Other media learned too that if the government and industry can silence Oprah, they can muzzle anyone. (One of the four confirmed U.S. mad cows was later found in Texas, appropriately enough.)

There are a handful of dedicated activists such as Howard Lyman who have been sounding the alarm on this. They include the ecologist Dr. Michael Hansen of Consumers Union and Dr. Michael Greger, a physician. Terry Singletary Jr., whose mom died of a version of the human form of mad cow disease, has been a relentless, unpaid activist on this issue.

Despite their dedicated work, there is no indication that anything is going to change here in America. The U.S. government refuses to implement the feed ban and the animal testing necessary. It doesn't matter if the President is named Clinton, Bush or Obama, because their bureaucrats in the USDA and FDA stay the course and keep the cover up going. Docile, eating what they are fed, trusting the rancher all the way to the slaughterhouse. Is that just the cows, or is it us, too?

This article was first published by Common Dreams and is reprinted with permission from the author.