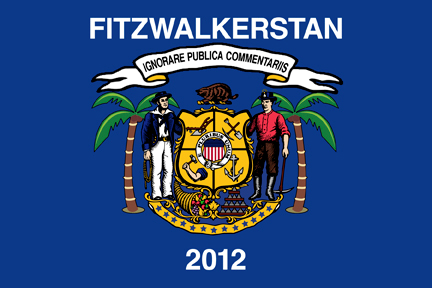 It was just another balmy-frigid February 28 for Andrea Musher. She stood outside the Wisconsin State Capitol with a green parasol, a pink frangipani, and a sign with palm fronds rising forth.

Madison's former poet laureate, Musher was one of about 25 protesters who gathered on what they called "Palm Tuesday" to celebrate the emergence of a new Wisconsin state tree, which could be dubbed the "O'Reilly Palm."

The event commemorated the anniversary of the day Fox News ran video of violent "Wisconsin" protesters, with palm trees waving in the background. Musher's palm was intended to help people understand that Fox "pretends to be a news source. Instead they are a source of propaganda and fabrication."

Colbert: Beware of Wisconsin Teachers with Scissors (and Palm Trees)

O'Reilly's shrill report suggested that the Wisconsin protests were being led by "professional left-wingers" who were organizing deliberate intimidation of Fox News reporters. O'Reilly backed the live report with video that showed an angry fellow confronting and pushing another man, palm trees visible in the far background. Police on horses intervene. Upon later review, it was determined that the footage was taken from an unrelated event in Sacramento, California.

In a satire that went viral to hundreds of thousands of people nationally, Comedy Central's Steven Colbert declared in a lead story that, "now these teachers are getting violent. No surprise given their unfettered access to craft scissors." Colbert warned, per O'Reilly, that Wisconsin unions "not only are busing in people from out of state, they're also busing in palm trees." Taking a jab at what many Wisconsin protesters called "Faux News" during the rallies, Colbert added sarcastically, "It's certainly not O'Reilly's mistake. Video comes in, video goes out. Never a miscommunication."

A Tree and a Trope: "Laughs in Spite of Dishonesty"

Soon after the Fox report, inflatable palm trees became a verdant eye-stopper in the Wisconsin winter protests. An Occupy group called the Autonomous Solidarity Organization adopted the palm as the new icon for a lapel button and other attire. Today, a visitor to Wisconsin might wonder at what the tree (or at least its trope) is doing in a state whose average annual temperature ranges from 39 to 50 degrees. Shaking off the frigid temperatures on the first declared "Palm Tuesday," Tom O'Grady, a sheet metal union member from Sun Prairie, helped set up inflatable palms outside the capitol. O'Grady said that the palm tree now "is a symbol of our cheerfulness" amid continuing protests and the ongoing recall of Governor Scott Walker. "We are able to laugh in spite of the [Wisconsin Republican's] arrogance and dishonesty."

Ted Voth, a retired United Food and Commercial Workers union member from Oscar Mayer, stopped at the capitol before beginning choir practice at a nearby Lutheran church. He said he was there to offer his support for a more serious reason. He had grown up in Mississippi with NAACP leader and civil rights martyr Medgar Evers. If the palm theme is light hearted, the cuts in union rights and social programs in Wisconsin are attacks on civil rights, he said. The Fox News coverage, in his view, had been "sheer nonsense, sheer ridiculousness."

While it's unlikely that Palm Tuesday will become a kind of "festivus" for February, one thing is sure: the O'Reilly Palm is in Wisconsin to stay. Voth adds that Fox could eventually be vindicated in reality, too. "With global warming, Wisconsin may some day have coconuts. Brought to you by the major energy companies."